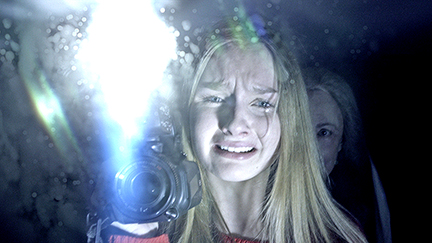 The new movie “The Visit” is a nice return to form of sorts for the former golden boy-director, M. Night Shyamalan. No, it’s not up there, qualitywise, with “The 6th Sense,” “Unbreakable” or even “Signs,” but this is certainly an entertaining little horror flick. His fans can breathe a sigh of relief that he has broken his string of recent cinematic flops.

The story is fairly simple; we meet two teenagers Rebecca (Olivia DeJonge) and Tyler (Ed Oxenbould) who are sent off to spend a few days with their grandparents (Deanna Dunagan and Peter McRobbie). The kids’ mother (Katheryn Hahn) had been estranged from her parents, so the kids aren’t quite sure what to expect from their visit to grandma’s house, an isolated farmhouse in rural Pennsylvania.

Things start off well, but there’s a hint of trouble when grandfather tells the teens to stay in their bedroom at night after 9:30 p.m. Then the kids start noticing odd behavior. What is Pop Pop hiding out in the woodshed? Why does Nana crawl around naked in the middle of the night? Is this just a case of people acting strangely as they age, or do the grandparents harbor some dark secret?

This being a M. Night Shyamalan movie, you can predict that the plot comes complete with a twist ending. I won’t spoil any more of the story here, but suffice it to say that I enjoyed the twist, although it was a mixed verdict among my friends at the film’s preview screening.

I also enjoyed the acting, particularly Olivia DeJonge, who made her character into much more than just another kid with a camera. That being said, the found footage movie motif has certainly run its course, which makes “The Visit” feel a little clumsy at times.

Still, let’s give credit to Shyamalan for taking a simple concept and layering in a lot of well-crafted moments of suspense. He has always been very good at infusing his movies with mood and style, and he is in top form this time out.

There are also quite a few humorous bits that keep the film moving along when story issues threaten to pull the audience away from the film. Granted, many of these moments are little more than poking fun at old people, but they do provide a welcome respite from the film’s creepier moments.

Whether you find those moments to be truly creepy or not will likely correspond with how much you enjoy “The Visit.” I enjoyed the creepy vibe just enough to enjoy the film, and perhaps more importantly, enough to make me forget about Shyamalan’s recent string of cinematic flops.

Well, almost forget. It will take more than just one “Visit” to scrub “After Earth” from my memory.

Movie reviews by Sean, “The Movie Guy,” are published bi-weekly in “The Port Arthur News” and seen weekly on KFDM and KBTV. Sean welcomes your comments via email at smcbride@sbgtv.com.com.

Sarah Cerrone said if there’s one thing that brings the people of Anahuac together, it’s the American alligator. Cerrone said... read more