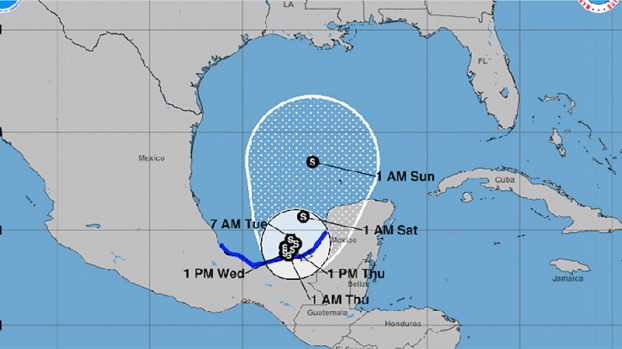 Tropical Storm Cristobal became the third named storm of the 2020 Atlantic hurricane season in the southwestern Gulf of Mexico, and could pose a threat to the U.S. Gulf Coast early next week.

Before that happens, life-threatening, dangerous flooding will continue in parts of Central America and Mexico, according to the Weather Channel.

Cristobal became a tropical storm around after midday Tuesday in the Bay of Campeche, after a Hurricane Hunter reconnaissance aircraft found wind speeds supporting a tropical storm.

It became a Tropical Storm later in the day.

National Weather Service Meteorologist-in-Charge Andy Patrick said the latest forecast is for the system to move into the southwest Gulf late this week as a tropical storm.

“There’s still a lot of uncertainty, especially for this weekend with the track and intensity,” Patrick said. “Please be prepared and stay up to date with the latest forecasts.”

Regardless of what happens, weather experts are expecting high rain chances this weekend and early next week.

According to The Weather Channel, Cristobal is likely to linger in the vicinity of the southwestern Gulf of Mexico this week.

This weekend, however, it’s expected to be drawn northward through the Gulf of Mexico through a break in subtropical high pressure.

That could bring Cristobal near the northern or western U.S. Gulf Coast by Sunday or Monday, anywhere from the Texas coast to the Florida Panhandle. It remains too soon to determine where this system would come ashore.