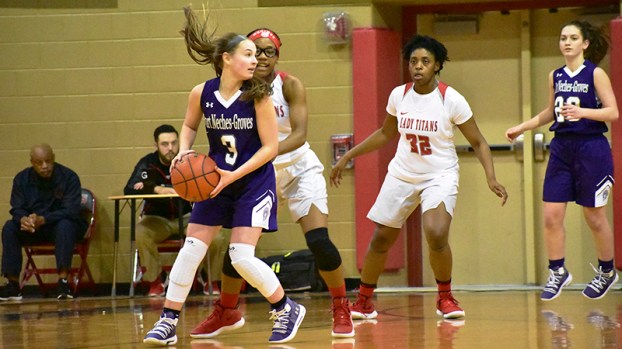 Austin College made inroads early, and the efforts paid off.

Port Neches-Groves’ Maylin Stampley has officially agreed to play basketball for the Kangaroos. Stampley, who averaged 12.7 points a game her senior season, said the Division III program based in Sherman was the first school that approached her about playing basketball.

“Austin College has expressed interest in me since my sophomore year,” she said. “I was able to go to a camp there and really liked the atmosphere. It’s a winning culture with proven coaches so I feel like I can go there, learn a lot and experience success. It’s also a prestigious school as far as academics are concerned, which was a huge selling point for me as well.”

“It’s definitely something she’s worked for,” Skinner said. “It’s good to see hard work pay off and I’m looking forward to see what she can do at the next level.”

As far as Stampley is concerned, getting to play at the college level is a dream come true.

“I’m excited to be a part of a seasoned program and to make new friends and travel with my team,” she said.

Stampley said she will follow team workouts geared toward conditioning and improving skills, while also working at a job, spending time with family and friends and preparing for college.

Stampley has received the Academic Excellence scholarship from Austin College, worth $104,000. She also received scholarships from the Association of Indian Athletes and PNG Little Dribblers.

“I think that obviously she’s grown in skill development,” Skinner said. “I think she’s learned how to play the game at a higher level for sure. It’s a combination of different things. I’ve seen her mature as an athlete, and I’ve seen her improve skill-wise.”

Skinner said Stampley is very determined, looking for challenge and looking to overcome those challenges.

“She’s a fighter,” Skinner said. “She has a fighting spirit, and that’s something that’s going to serve her well at the collegiate level.”

Stampley said playing for PNG taught her to stay determined and never give up on her dreams.

With hard work, the right mentality and true dedication, no goal is out of reach, she says.

“Playing basketball at PNG also made my love for the game grow immensely,” Stampley said. “I want to give a huge shout-out and ‘thank you’ to Coach Skinner for believing in me and pushing me beyond my limits these past four years, and to all of the coaches at PNG for their key roles in forming the athlete I am today.”

Stampley hasn’t decided on a major yet but wants to head in the direction of secondary education and coaching.