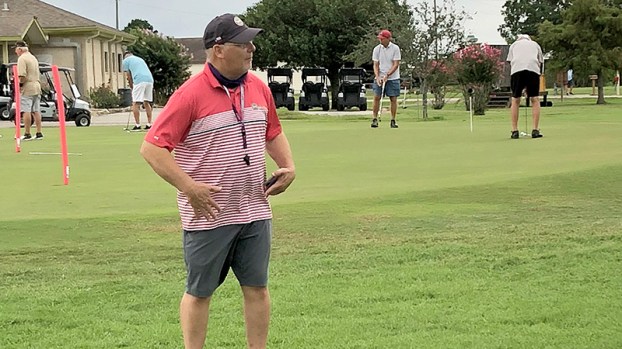 He expected the COVID-19 pandemic would keep attendance lower than usual, but low numbers aren’t going to stop him from having a camp, and neither will the pandemic. Hopefully rainy weather won’t either.

“I knew it was going to be lower,” Honza said. “I would have expected it to be a little bit bigger. The smallest group didn’t make it — the parents of the younger ones are still concerned about socially distancing on the golf course. We’re doing it, we find a noodle and stay on it. It’s a little easier on a golf course.”

Honza’s camp this year has 10 kids participating through July 30 at the Babe Zaharias Golf Course.

On Monday, Honza focused on teaching his participants fundamentals like rip, ball placement and posture. Tuesday was dedicated to practicing the short game, putting, chipping and using the 9-iron. Today is dedicated to the intermediate game with the longer irons, and Thursday will be spent with drivers and the long game.

Honza said the kids tend to enjoy the sessions with drivers the most, as do most people, but he said it’s important for his golfers to practice the whole game. 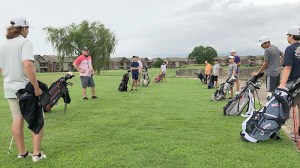 “Thursday we’ll hit drivers all day, because that’s what they want to do,” Honza said. “It’s fun, but we’ve got to teach them all these other shots. Today we’re hitting a full shot, short iron, but before that we’re hitting half-shot, and they were all struggling with the half shot because they don’t practice it. Nobody practices the half shot, but on the golf course you’ve got to have a half shot sometimes. So we’re teaching them there’s a time and a place.”

Blake Makelki, who will be starting his senior year at PNG and has played on the golf team all three years previously, is assisting Honza at the camp and passing on to the kids what he’s learned from playing golf at tournaments.

“I think it’s really good to get a lot of the basics down,” he said. “There’s a lot of things you have to figure out on your own when you practice. Things like this kind of help you get started in the right direction. You can see this is what most people do, and you know what you like to do, and it helps you mold your game a little bit, learn some new shots and techniques. They helped me a lot when I was younger.”

COVID-19 has forced changes to Honza’s camp. He’s set out noodles, 12 feet apart for good measure, as markers for the kids to know where to safely stand. Everyone wears a mask when they get close to talk or for instruction, and Honza is trying to keep his distance whenever possible.

“Obviously we can’t be as much one-on-one,” he said. “I have to be much clearer with my words because before I could just take the club. It’s a challenge.

“We talked to the parents up front and told them normally we’d be in there holding their clubs, turning them and putting them in positions, and this is more demonstration. You’ve got to be intentional about it, when you leave the kids to their own devices they’re going to want to be in their buddy’s back pocket.”

Makelki, for his part, is also getting the chance to get in some more practice. COVID-19 has actually made it easier to find the time to golf, since he has little else to do.

“I can go hit the course whenever,” he said. “It’s a little bit weird social distancing on the course, but we’re making it work. We’ve been getting in a lot of practice in lately, so that’s good.”

Weather permitting, Honza has a fun activity for the kids Thursday.

“I’ll take a bunch of marshmallows, put them in the freezer, get them hard, and we’ll have a driving contest, but we’ll use marshmallows,” he said “They’ll have a lot of fun.”