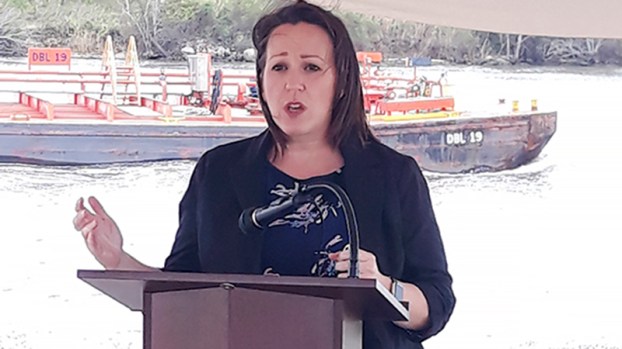 Democrat Mary “M.J.” Hegar met with local elected officials, including Jefferson County commissioners Michael Sinegal and Bo Alfred, to discuss the deepening and widening of the ship channel in the Sabine Navigation District.

Hegar spoke for approximately 20 minutes before heading to Lufkin and Tyler.

“One of the things I learned today is how important this area is to job creation,” Hegar said. “We’re getting a lot of news about the places where we are losing jobs, and we are certainly losing jobs in all sorts of places. We have record unemployment, but I’ll tell you that shipping and the longshoremen are adding jobs. They’re gaining jobs. In order for us to capitalize on that and make sure we capitalize on as many jobs as possible, we’ve got to deepen and widen this channel. The companies and industries that would benefit from that are fighting for it.”

Hegar said she would push for the government to deliver the capacity needed to make the channel more accessible for bigger ships.

“It’s not just for shipping,” Hegar said. “It’s not for just oil and gas. It’s for national security, and as a combat veteran, you can be sure I’m going to be fighting for that.”

Hegar is an Air Force veteran and Purple Heart and Distinguished Flying Cross recipient known for successfully suing the military branch to remove a policy barring women from ground combat. She lost a November 2017 election to incumbent John Carter for a U.S. Representative seat (Texas District 31) but won the Democratic primary over State Sen. Royce West in a July runoff.

She is challenging Cornyn, who is seeking his fourth six-year term in the Senate. Cornyn visited the Jefferson County Republican Party Headquarters in Port Neches on the eve of the March primary, just days before the start of the coronavirus pandemic.

While in Port Arthur, Hegar took Republican Gov. Greg Abbott to task on the policy of allowing only one mail-in drop-off spot, among other issues she hopes to tackle in Washington if elected.

“Right now, we’re leading in the number of people who don’t have health insurance,” Hegar said. “We’re leading in gun violence. We’re leading in getting pummeled by climate change. I believe we should be leading in all the places where other states should look to us as the example. Voter suppression is very real here in Texas, but don’t let it keep you from voting. The Texans I know that I grew up with, if you try to intimidate us out of doing something, if you take away our rights from doing something, it just motivates us to want to do it more.”

Port Arthur voters will have to vote in one line for municipal elections and in another line for the other elections.

**This version reflects the correct list of elected officials Hegar met during her visit.**