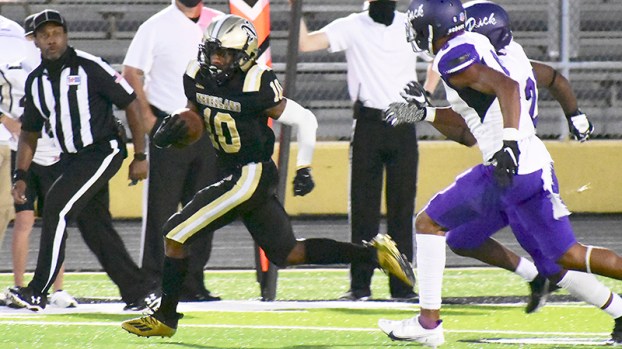 NEDERLAND — Senior running back Josh Mazyck is coming off one of the best games of his career in Nederland’s 42-20 win over Jacksonville.

Mazyck had 174 yards rushing on four touchdowns, with most of his damage done by halftime.

Even with such an impressive stat line, Mazyck said the performance does not rank at the top of his most memorable high school moments.

His favorite highlight came against Baytown Lee on one play in particular.

“I ran through the hole, and a dude was trying to arm-tackle me,” Mazyck said. “I jumped over that and landed with this other guy and another guy was coming from the other direction. I stomped my foot and stepped back and they hit each other and I took off running. That was a 40-something-yard touchdown.”

Mazyck first earned varsity carries as a sophomore. He was, and still is, a smaller back, but the underclassman runner that would often look for lanes to bounce to the outside has shifted toward a back that will now punish those who try to bring him down with an arm tackle.

Mazyck said he had to learn that a guaranteed 5 yards is better than a possible home run that ends up in a negative play.

“He’s got the speed,” Barrow said. “He’s also very powerful in his upper body. His stature doesn’t look like it. He’s become a patient runner, and he is still developing in that. He’s trying not to dance in the hole as much as maybe he did last year. He uses that explosiveness, both speed and power, to get through that hole.”

Against Jacksonville, defenders routinely bounced off Mazyck, who refused to go down on first contact. After a defender would miss, the senior would flash the speed that made him the primary back.

In the Bulldogs’ first game of the season against Lufkin, Mazyck struggled to find daylight on the ground and defenders knifed into the backfield. He ended the game with 20 yards on 13 carries.

He wouldn’t finish the game without making an impact. Late in the game, lined up in the slot, Mazyck got behind the defense for a huge play and finished the game with three catches for 77 yards.

“When you have other players like (wide receiver Kyndon Fuselier) that defenses tend to focus on when they line up, you split Josh out, and that is another person that the defense has to make sure they know where he is,” Barrow said. “That is a very, very important weapon for us to be able to split him out at receiver. We want to get him the ball to get him going.”

Mazyck said he borrows from different running backs to add to his arsenal.

For his speed, he watches Eric Dickerson. For elusiveness, he puts on Barry Sanders highlights. For power, he watches Leonard Fournette and Saquon Barkley.

Mazyck said the runner his game most resembles is that of fellow black-and-gold wearer Alvin Kamara of the New Orleans Saints. Kamara is known as one of the NFL’s most versatile backs with an ability to stay on his feet while absorbing contact.

“His balance and everything — they were telling me my sophomore year that I was looking like Kamara,” Mazyck said.

The running back will try to keep his hot streak alive as he and the Bulldogs face off against Port Neches-Groves at Bulldog Stadium on Friday.

DEWEYVILLE — Sabine Pass had to make a five-day turnaround after a Monday afternoon loss to Burkeville, and in that... read more