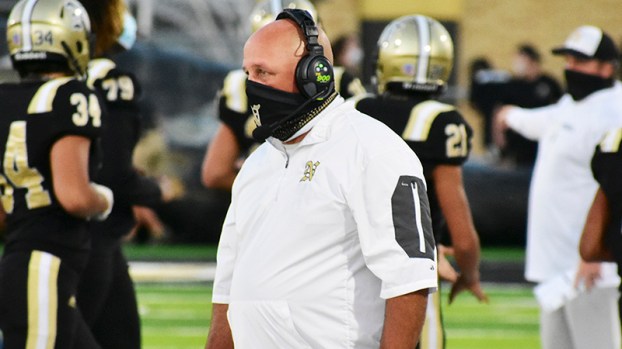 Bulldogs’ next mission: Follow up strong showing with homecoming win

NEDERLAND — The Bulldogs are hoping to build off what might have been their best performance of the season last week as they battle the Texas City Stingarees.

The game is set for 7:30 p.m. today at Bulldog Stadium and will be the homecoming game for the black and gold.

“That was great for us,” Nederland head coach Monte Barrow said. “The only way you get the taste out of your mouth (from losing to Port Neches-Groves) was to get back on the field. This season is more than one game. That is the same thing this week coming off a win. Nothing will be given to us.”

Barrow said his team will have a tough test stopping the district’s leading running back, Semaj McCall.

“They have the No. 1 back right now,” Barrow said. “His total carries are just way above everyone else, which means they like to feed him the ball. He is a good running back. He has moves and speed. That will be a good challenge for our defense.”

Barrow said slowing down McCall could also help lift the Bulldogs’ running Josh Mazyck, who currently sits No. 2 in yards in the district, into first place.

“The whole team might get to put a stamp on that,” Barrow said. “It’s not about one player for either team, but that is something that we have to stop for them.”

Both teams come into the game at .500 in the district. A win would put the victor in the driver’s seat to control its destiny for a playoff run, Barrow said.

“We are playing another team that is 1-1 in district and they don’t want another loss on their record,” he said. “They are going to be desperate just like we are.”

The Stings are coming off a 45-38 loss to Kingwood Park. Texas City defeated Santa Fe 31-6 the previous week.

Given the craziness of the season and having to already deal with Mid-County Madness, Barrow said he doesn’t anticipate his team will be distracted by homecoming week.

“We encourage all of our kids to take part in all of the festivities,” he said. “It’s something they have to keep on the outside and not let it in. They need to be high school students, but also realize that their main role is to be ready to play Friday night.”

Avery Trace Apartments was the sight of a Sunday night drive-by shooting where several apartments were struck by gunfire, police... read more