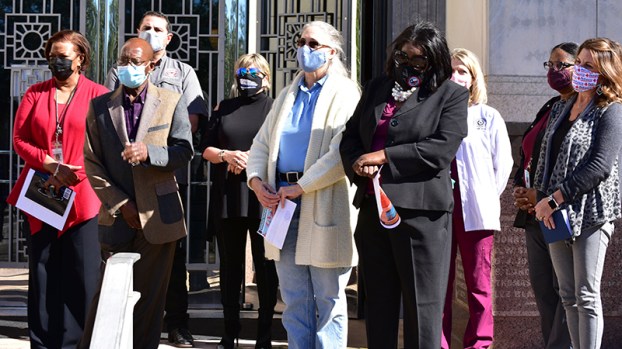 BEAUMONT — Toward the end of a 30-minute news conference outside the old Jefferson County Courthouse entrance steps Wednesday, approximately three ladies out of a group of 11 individuals who oppose local and state laws mandating the use of facemasks in public asked questions challenging Southeast Texas health leaders on the legitimacy of facemask effectiveness during a pandemic that has lasted eight months.

Local and state mandates require citizens to wear face coverings over the nose and mouth when visiting establishments open to the public, except in certain instances including indoor dining.

Just before Hardin County Health Authority Dr. Jana Winberg explained how masks and other personal protective equipment were determined effective at the beginning of the pandemic in fielding a protester’s question, another lady interrupted with a question challenging that explanation, adding her son has to take his mask on and off for a basketball game.

As Winberg was interrupted, Jefferson County Judge Jeff Branick appeared to have enough and took over the podium.

Shortly before the conference concluded, Chambers County Health Director Mary Beth Bess responded to a final question from the protesters about whether masks work.

“Just like any guidance, this is a novel virus, No. 1. It’s very new,” Bess said. “We have to wait until research comes out through clinical trials, through outcomes and hospitalizations to find out what’s the best method to approach this thing. As research came out, CDC updated their guidance, and thank God they did. … Thank you for the questions. It gives me an opportunity to tell people we will continually update guidance as we have better outcomes and better research.”

The protesters are not part of a formal organization, according to Lumberton resident Amity Beck, who was among the group.

“I have a right to breathe oxygen-saturated air and not breathe my own carbon dioxide if I don’t want to, and I certainly have the right to do that for my children,” Beck said.

Texas Gov. Greg Abbott on July 2 issued an executive order requiring citizens 10 and older in counties with more than 20 COVID-19 cases to wear a mask over the nose and mouth while in most public establishments, and city and local governments have enacted similar measures.

In Jefferson County, businesses who fail to enforce a policy of wearing masks may be fined up to $1,000 per violation, and a health authority who learns a person assigned to a 14-day quarantine has violated it can cite the offender for a Class B misdemeanor charge, which carries penalties of up to 180 days in jail and/or a $2,000 fine.

Branick said he has no desire to penalize anyone not following COVID-19 prevention rules. But Beck is asking for more trust from local officials instead of laws.

GROVES — Shoppers will have a chance to beat the holiday crowds while shopping local with the 2020 Christmas Tree... read more