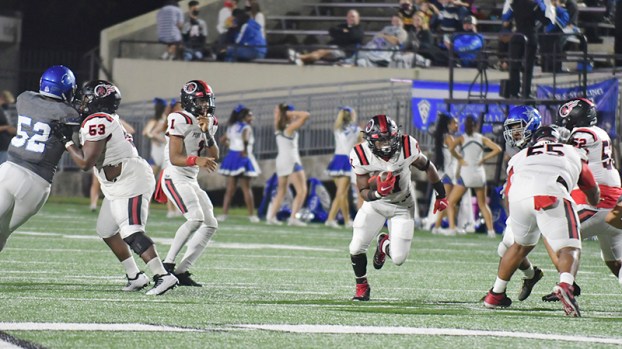 Branden Chaney of Memorial attacks big hole up the middle against Baytown Sterling on Friday night in Baytown. (Jereem Augustine/Special to The News) 11-20-20

BAYTOWN – The Memorial Titans are District 9-5A Division I champions.

The Titans claimed outright possession of the title as they rolled past the host Baytown Sterling Rangers 39-8 on Friday night at Stallworth Stadium. The win set off a raucous celebration in the Memorial locker room after the game.

“Our locker room is always loud,” Memorial coach Brian Morgan said. “These guys have a lot of fun, and they’re going to enjoy this championship.”

Memorial (8-0, 6-0 in 9-5A-I) struck quickly, taking a 7-0 lead before most of the fans got settled on the aluminum bench seats. Quarterback Jah’mar Sanders hit Ilijah Williams for a 60-yard touchdown pass on the game’s third play. 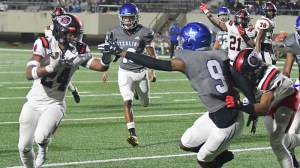 Kendrick Sam of Memorial takes a block and runs around a Sterling defender Friday. (Jereem Augustine/Special to The News) 11-20-20

Sterling drove down the field on the ensuing possession, but the Rangers’ drive stalled in the red zone. Sterling settled for a 28-yard field goal by Ramiro Longoria to cut the Memorial lead to 7-3. The Rangers never got any closer.

“We talk about complementary football,” Morgan said. “We got contributions from all sides tonight. That stop seemed to give us a big lift.”

Sanders, who left the game briefly in the second quarter after taking a late hit out of bounds, threw for 172 yards and three touchdowns. Branden Chaney ran for 191 yards.

“Branden and Jah’mar are tough kids,” Morgan said. “They really did a great job tonight, but we had so many players step up.”

The Titans are off next week before hosting Friendswood in the regular-season finale on Dec. 4.

“The bye week comes at a perfect time for us,” Morgan said. “We’ll be able to give our players some time to recuperate.”

The Titans will practice a few days before the Thanksgiving holiday.

“That turkey is going to taste awfully special this year,” Morgan said.

The game changed when …

The Titans scored on the game’s third play, a 60-yard pass from Jah’mar Sanders to Ilijah Williams, just 75 seconds into the contest. The Titans served notice that they weren’t looking past the Rangers and took control from the outset as they were determined to grab the District 9-5A Division I title.

The game ball goes to …

Sanders, who shook off his injury to throw for 172 yards and three touchdowns.

The Titans had 431 yards of offense. Sterling finished with 181 yards.

The Titans have a bye next week before closing out the regular season by hosting Friendswood at 7 p.m. Dec. 4.

— By Pat Murray, Special to The News

The high-powered Memorial Titans could solidify, at least a share of the District 9-5A Division I title with a win... read more