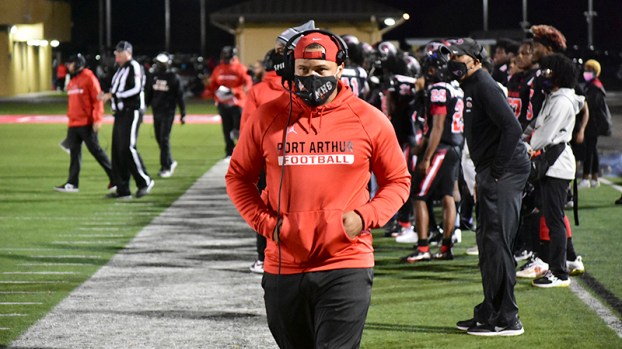 Korey Mangum is in his third year leading the defensive charge at Memorial. (I.C. Murrell/The News) 10-16-20

Now, as defensive coordinator for the undefeated Memorial Titans (8-0, 6-0 in District 9-5A Division I), he finds joy watching his players learn and grow on and off the field.

Mangum, a La Marque graduate, played for the Seminoles from 2005-2009. He joined Memorial head coach Brian Morgan’s coaching staff in 2018.

In his third season, his defense leads the district in passing and total yards allowed and is second in rushing.

“He is a key piece here,” Morgan said of Mangum. “He relates to our kids really well. He grew up in the same type of environment. He was at a successful high school program and was a really good college player. I think he compliments our staff. I can talk to players about certain things, but he can talk to them from a been-there, lived-that situation. They understand that and that is a huge deal.” 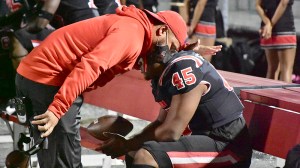 Mangum was on the La Marque state championship team in 2003. He sees a lot of similarities between Port Arthur and his hometown.

“When I took the job, one of my close friends called me and told me (Port Arthur) was going to remind me of La Marque,” he remembers. “Seeing the way the kids worked, moved around and were hungry to make a better life for themselves was what I saw in La Marque. I recognized how much they love sports and love playing the game.”

As far as Mangum’s coaching chops, Morgan said he has so much faith in the staff, he just tries to stay out of the way.

“Some of our players tell me to come on the defensive side (of the practice field), and I tell them I don’t want to screw it up,” he said. “He does a great job and gets them to play at a high level as well. He stays on them. We have some guys with some different personalities. Some are emotional and he handles them really well.”

Morgan credits Mangum’s attention to detail as one of the keys to the defense’s success.

“He requires a lot from a week-to-week basis,” Morgan said. “I don’t know how much is evident to an everyday fan, but they do a really good job of mixing coverages and changing things on a weekly basis. He also gets those guys to play at a very high level.”

Mangum enjoys the interactions with the players the most.

“I like having fun,” he said. “That brings a different joy. It can be third string, JV, freshmen. I enjoy being able to relate to them. The staff is really close and we like playing around.”

He said one of the hardest things he had to learn was that he could not make plays for his players.

BOYS BASKETBALL: Young PNG ready to “play every game like it is our last”