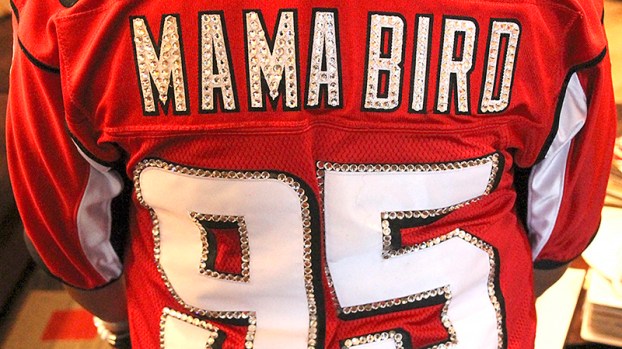 Pictured in 2017, the nameplate on the back of Barbara Babineaux’s jersey reads “Mama Bird,” which was her nickname. Her sons Jordan and Jonathan Babineaux have played for the Seahawks and Falcons, respectively. (I.C. Murrell/The News)

One of her sons was a Seattle Seahawk. Another was an Atlanta Falcon.

Quite naturally, Barbara Babineaux earned the nickname Mama Bird. It was printed on the nameplate of her No. 95 jersey in support of Jonathan Babineaux, who led the Falcons to the Super Bowl in February 2017.

For the second time, a Babineaux made it to the Big Game. Jordan got there with the Seahawks in February 2006.

Throughout their NFL careers — and afterward — Barbara had to be doubly proud.

It’s not just because Jonathan and Jordan got to the Super Bowl. It’s because they came back to help their community.

They organized a comedy show and concert featuring Tank at a Beaumont theatre on a Friday and played a charity basketball game along with Stephen Jackson the next day at Lamar State College Port Arthur. The events benefited the Babineaux Family Foundation, which raises awareness of lupus and supports community development and scholarships.

They both had stellar college careers, of course. Jonathan, a defensive tackle, collected 19 sacks at the University of Iowa. Jordan, a safety, was a Division II All-American at Southern Arkansas University, and I had the pleasure of seeing him play during his freshman year, not knowing how great he would be.

For whatever reason, the name next to No. 2 on SAU’s roster stood out to me. My first guess was that someone getting on the field as a freshman for the perennial power Muleriders had to be pretty darn good.

Jordan and Jonathan were.

As much credit as Barbara deserves for raising five children to be successful, she was really humble when I paid her a visit ahead of the 2017 Super Bowl at her Port Arthur home.

Humble is how she described Jonathan, who retired after the season.

“His thing is, whether he makes it to the Super Bowl or not, it’s all good,” she told me. “He’s had a long career.”

For getting to the Super Bowl, the Babineaux brothers each earned a gold ball from the NFL through its High School Honor Roll program, which honors each high school with the memento for every graduate or head coach that participated in the Super Bowl.

Jordan, who graduated with Jonathan from Lincoln High School in 2000 (Jonathan is older by 10 months), addressed the Memorial High School student body ahead of the 2016 Super Bowl when NFL alumni from the Port Arthur Independent School District were honored.

But the next year, Mama Bird was not the only proud mother from this area of a Super Bowl player in Houston. Mary Bryant was cheering on her son and Jonathan’s teammate, former Bridge City kicker Matt Bryant. And Stephanie Roberts’ son, Memorial graduate Elandon Roberts, was a rookie linebacker for the New England Patriots.

Barbara even found herself preparing for the game, telling me she wanted to “get her mind right.”

Her method? “Say a prayer.”

Today, I’m saying a prayer for the Babineaux family. Mama Bird left us Dec. 3 at The Medical Center of Southeast Texas at age 70. A private funeral is scheduled today.

I’m also saying thank you, Mama Bird, for raising fine young men who came back to impact our community. As Jordan once said: “Port Arthur wants to know what you’re doing for Port Arthur.”

Gladdie Fowler came into the education field with the goal of being a change agent and helping students excel and... read more