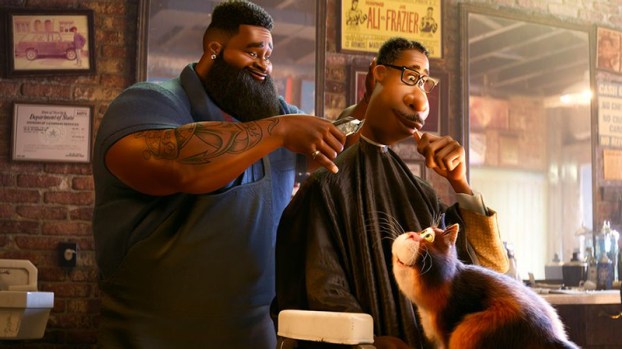 There’s a pretty poignant scene in the animated film Soul.

Released last month from Disney and Pixar, one of the best moments takes place in a barbershop, where the proprietor tells one of the main charters that his original desire in life was to be a veterinarian.

Dez, who is the barber, needed to make money fast for an ailing daughter so he went into barber training, which was cheaper than pursuing a chance at becoming a veterinarian.

The client responds, saying Dez must feel bad for not following his original passion.

Dez says he has no regrets and actually finds life in the barbershop quite soulful.

“That’s the magic of the chair,” says Dez, voiced by comedian and actor Donnell Rawlings. “That’s why I love this job. I get to meet interesting folks like you, make them happy and make them handsome.

“I may not have invented blood transfusions, but I am most definitely saving lives.”

The final line is delivered right as Dez holds up a mirror for his client, displaying the perfect haircut just in time for the main character’s important musical performance.

That line and circumstance struck me for its delivery and what it says about a job and service well performed.

Maybe it hit me because I was watching the movie two days after Christmas with my dad while we both were getting over the death of my grandfather, who was my dad’s last living parent.

My grandfather hated when he saw me doing anything he deemed lazy, often telling me, “idle hands are the devil’s workshop.”

He took pride in what he could build or fix with his own hands, especially if that work made things easier for a loved one.

The thing about the line and set-up in the movie was that it was scripted, created by a writer who crafted the perfect scenario for such a lesson. It wasn’t real, even if the message was.

Fast forward a week and I found myself interviewing Neches Brewing Company owner Tyler Blount, who was speaking about his business plan to move into a new location at 1117 Port Neches Avenue, which would expand the operation from a 2,000-square-feet home to one of over 20,000 square feet.

A brewer by trade, Tyler talked more about family and community when discussing the business venture. It was obvious what inspired him about his chosen profession.

Tyler and his wife Brittani have two young children who have basically grown up in the brewery with them and there is a wall where they mark their children’s height each year, documenting the passage of time with growth.

“If we ever move out of this building, I am taking that whole wall with me,” Tyler said.

We all have passions, and they are so much more enjoyed when we can use them for the enjoyment of others.

That’s a script that no writer can beat.

Stephen Hemelt is the president of Port Arthur Newsmedia. He can be reached at 409-721-2445 or stephen.hemelt@panews.com.

I had the chance to visit the Hospitality Center on New Year’s Eve morning before they welcomed those in need.... read more