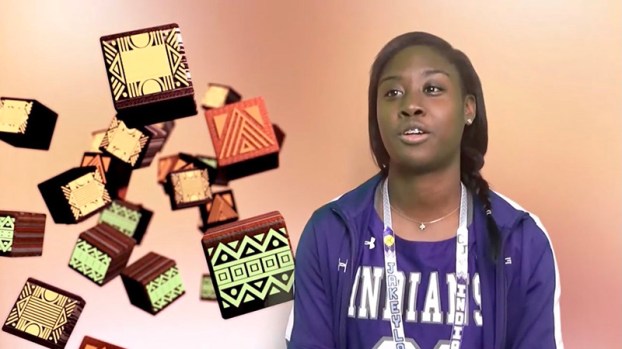 Vaughn said he hopes the project helps knock a stereotype he said people have of PNGISD.

“It is really good for African Americans that go here but also other races, too,” Vaughn said. “It shows that this school is not what people think that it is — just a predominantly white school that just doesn’t support anything else. It is really good for the community.”

Vaughn believes the videos are having a positive impact on the school.

“We are able to pick who is inspirational to us, but we are informing people about people and things they really didn’t know,” he said.

JaKeyla McDaniel, who plays softball for PNG, made a video about her hero, A.J. Andrews, who was the first woman to win the Rawlings Golden Glove award in 2016 for her play on the softball diamond.

McDaniel said Andrews was at a tournament that her select softball team attended. The student was able to meet Andrews.

“JaKeyla! You are amazing,” Andrews said in the post. “I want you to know that players like YOU are my WHY. Thank you so much for sharing this with me! Always remember You are braver than you believe, stronger than you seem and smarter than you think! I would love to come watch you play.”

McDainel wasn’t expecting the softball star to see the video.

“It was overwhelming,” she said. “For her to like it, retweet and comment on it was an amazing feeling.”

While all of the videos published in the first week have featured Black students talking about inspirational Black figures, educator Greg Picazo said some of the upcoming short videos will feature students of other races.

“We wanted to come up with a project to make everyone more inclusive,” Picazo said. “It sounded like an awesome idea and it has just gotten better and better because the kids have been phenomenal. Getting to sit down with them and learn what they have learned about who their heroes are, it’s goose bumps every time we do an interview.”

Picazo has been most impressed with the students’ passion.

“It is awesome,” he said. “Obviously, I am a lot older and have been through a lot more than they have, but to see them choose Dr. Martin Luther King, who was 50-60 years ago and still understand the message of him or Malcolm X is cool. I asked them how they came to learn about Dr. King and they would say their mom instilled his values and accomplishments in me.”

By the end of the month, the project will total 18 videos (the district has two teacher work days) next week. The videos can be found on the NDN Press YouTube page.

NEDERLAND — A Mexican food Mid-County mainstay is serving up a Valentines Day special. Those wishing to seek a night... read more