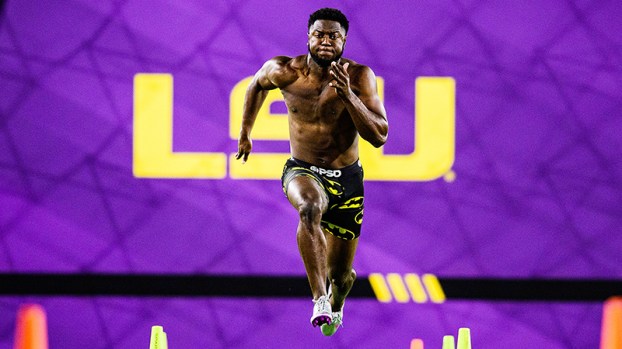 Kary Vincent Jr. looks like he is lifting off the ground during his sprint this week at the LSU Pro Day in front of NFL coaches, executives and scouts. Photo by: Gus Stark

Southeast Texas sports fans know there is nothing that can slow Vincent, who wowed professional football executives and coaches this week by posting the fastest 40-yard sprint at Wednesday’s LSU pro day.

It was the natural progression from the former Memorial Titans standout who routinely dusted football and track opponents while starring in Port Arthur.

The 2017 graduate of Memorial chose not to enter his name into the 2020 NFL draft, instead choosing to compete another year for the LSU track & field team and focus on a senior fall campaign as a member of the defending champion Tigers football team.

Yet in August of 2020 he announced his intention to skip that year’s college football season.

“The decision was obviously hard,” he said. “I started playing football in 2007. All the way up to last year, I played football and had a football season consecutively. We faced things as a country we had never seen before with COVID-19. I contracted it myself, recovered from it and picked up some symptoms that nobody could really identify. I felt it was best for myself to step away from the game and focus on myself and make sure myself and my family would be healthy.”

Vincent said his health scare is behind him, and months of training with the likes of LSU cornerbacks coach Corey Raymond, former NFL defensive back Ryan Clark and noted speed trainer Moe Wells have put him in the perfect position to enter the 2021 NFL draft.

Vincent says he speaks “day in and day out” with former college teammate Devin White — who just won the Super Bowl with the Tampa Bay Buccaneers — about the importance of staying focused.

Vincent said he has spoken with several NFL teams, including the Buccaneers  and Buffalo Bills.

He said playing at LSU against the likes of receivers Ja’Marr Chase, Terrace Marshall Jr. and Justin Jefferson put him across from the “best of the best.”

“I don’t see how that wouldn’t help anyone,” he said. “They benefited me as a player, as I believe I have benefited them. Being able to compete against those guys boosts my confidence and assures me that I am ready for the next level.”

Despite his role as a defensive player, Vincent said his ability to catch the ball is what sets him apart from other defensive backs.

“Whenever I see a ball, I am trying to catch it, whether that is with one hand or one finger,” he said. “I feel like anytime a ball is within my radius I can catch it. That separates me from a lot of guys. A lot of DBs are not used to catching balls. That is something I feel great at.”

The draft is scheduled to be held in Cleveland from April 29 to May 1.

PNG ready for Friendswood in postseason clash of high-ranking teams

PORT NECHES — Fresh off a 2-1 victory in the second round of the 5A playoffs, the Port Neches-Groves girls... read more