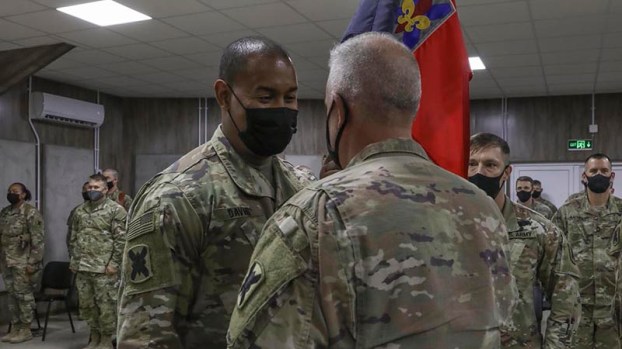 ERBIL AIR BASE, Iraq – A Memorial High graduate is now a combat team commander in Iraq.

A change of command ceremony took place at Erbil Air Base.

Davis is a 2009 graduate of Memorial High School, where he commanded the school’s first NJROTC program.

Davis said the soldiers in this company have had more unique experiences in these past two years with mobilization, hurricanes, floods, ice storms, COVID-19 and deployment.

“Under CPT Tregre’s leadership, this company has met every one of those challenges head on and been successful at each turn,” Davis said. “I’m so excited to be taking command of HHC at such a crucial time in this unit’s history, and thankful to Col. (Scott) Desormeaux for affording me this opportunity of a lifetime. It’s an absolute honor to join such an exceptional group of enlisted, non-commissioned officers, warrant officers and officers that prove time and time again that whether locally or globally, this unit is always ready to protect what matters.”

Davis, commissioned into the LANG through the LSU ROTC program in 2014.

Before assuming command of HHC 256 IBCT, he was the Protection Officer for 256 IBCT.

Davis has participated in multiple brigade exercises to include a rotation at JRTC at Fort Polk. He was activated in response to Hurricane Laura in 2020 before being activated in support of Operation Inherent Resolve.

In addition to being deployed overseas in support of Operation Iraqi Freedom in 2010, the company has been activated to support multiple emergency operations to include Hurricanes Katrina, Rita, Gustav, Harvey, Laura, running multiple COVID-19 test sites and multiple major flood events that ravaged Louisiana in 2016.

Desormeaux said he knows the kind of character and quality that Davis possesses.

“Every day when you wake up be excited to go to work because being a commander is the single most challenging yet exciting job you will ever hold in the Army,” Desormeaux said.

Port Arthur is set to see several new restaurants in the coming months ranging from a popular brunch-style eatery to... read more