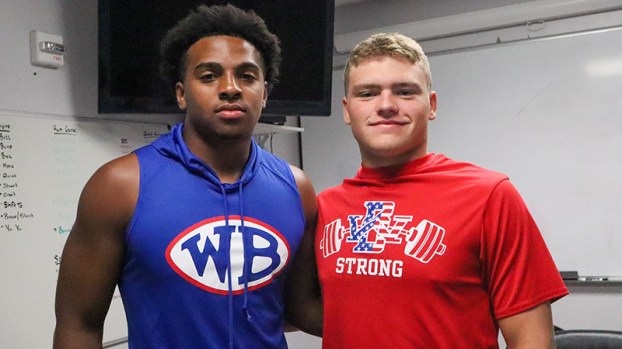 West Brooks’ Bryce Anderson, left, and Garrett Richard were freshmen when the Bruins went to state in 2018. Chris Moore/The News

BEAUMONT — In 2018, the West Brook Bruins were two points away from being state champions. Senior quarterback/defensive back Bryce Anderson and linebacker Garrett Richard were freshmen at the time but got a front-row seat to see what it takes to make it that far.

Anderson is one of the state’s and nation’s most sought after recruits, turning down offers from Alabama, LSU, Michigan and plenty more to attend either Texas or Texas A&M after high school.

Langston took over in spring and said he has been impressed with how Richard and Anderson have taken the lead.

“Bryce is obviously talented, but he has done a great job leading our 7-on-7 this summer,” Langston said. “He pretty much texts all the guys and tells them where they need to be and what time they need to be there. He has taken on that role. I think he wants to leave here and be considered one of the greatest ever at West Brook or be mentioned with those guys. He wants a great senior season.”

Anderson has balanced a busy schedule between being with the team and making recruiting visits across the nation.

“I set the recruiting aside until I take my visits,” he said. “When I am in workouts or the season, there is no recruiting.”

Langston said he is impressed with Anderson’s ability to stay focused as the nation’s top coaches call him.

“He’s had a lot of people pulling at him, but he has been here every day at workouts,” Langston said. “He is one of the best players in the state, if not the country. He has great parents. It all starts at home. He has had a lot coming at him. I know about him in Junior Olympics. I always kept up on the news in Beaumont and he has always been that guy. The thing that I didn’t know is how fast he was until I went to these track meets.”

“Whenever Bryce is out there, we always have some kind of special package,” Richard said. “It gets in their head for sure. The other team has to be perfect and even when they are he still makes something happen. I know last year other teams would keep their offense on the field for as long as possible to keep him off the field.”

Anderson said Richard knows the game inside and out.

“He’s really smart,” Anderson said. “He knows what is going to happen before it happens. It helps the defense a lot. He has been the leader on defense since his freshman year, so he knows the system.”

Langston said Richard is on campus everyday and is one of the most hardworking guys in the program.

“He is a two-sport guy, who juggles baseball and football, but it is important to him to be here with his teammates in the summer,” Langston said. “He is a guy that leads by example.”

Anderson said he wants to win state this year, adding just an appearance in the title game won’t be enough.

Richard is aware of what is at stake.

“It is our last season,” he said. “It just feels different. I know it is only the summer, but we aren’t just playing football at this point. We’re trying to go out with a bang.”