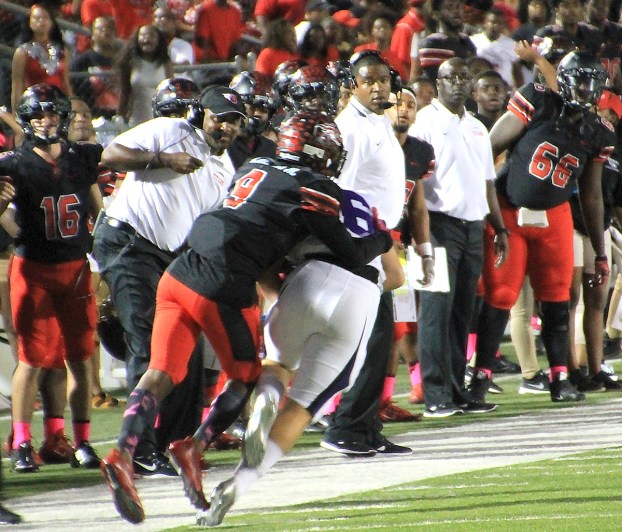 It has taken a while but Kenny Harrison might finally be over Port Arthur Memorial’s loss to Vidor in Week 11.

The loss still stings, but he looks at the Pirates’ 31-21 defeat over the Titans in a whole new light these days.

“Honestly, I think that loss might have been a blessing,” Harrison said. “As a team and coaches, we have addressed a few things and set a few things straight. That loss happened at the right time. We needed to get back to focusing on the small things and we had lost sight on a lot of things. Our team learned a valuable lesson that night in Vidor.”

Memorial got back on track last week in the bi-district round against New Caney Porter. The Titans dismantled the Spartans 49-3 and now turns its eyes to Fort Bend Elkins.

Memorial and Elkins (6-5) face off at 1 p.m. today at Turner Stadium in Humble.

It was the Knights who were the team to last beat the Titans in the playoffs. Elkins eliminated Memorial in 2013, 48-21, in this very round.

The loss also marked the last time the Titans had stepped on the field for a playoff game before last week’s victory over Porter.

Harrison knows that game three years ago really has zero to do with tonight’s contest. He did not mention it much this week, but he was talking about it after the win over Porter.

“I definitely remember that night,” Harrison said last Friday. “I have been looking forward to playing those guys again since they beat us three or four years ago. They have a good program.”

The Knights are riding a four-game winning streak that dates back to Oct. 14 when Manvel beat Elkins 50-14. Elkins began the season on a three-game losing streak with losses to Dickinson, Conroe Oak Ridge and Fort Bend Travis.

Elkins has made the playoffs three straight seasons under coach Dennis Brantley, who has been at the helm since 2011.

Luke LeBlanc has thrown for 1,093 yards on 91-of-173 passing with eight touchdowns and three interceptions, according to chron.com.

Leonard Harris leads the Knights in rushing with 546 yards on 98 carries and nine touchdowns.

“They are a very solid and athletic football team,” Harrison said. “They want to be balanced on offense, but if they lean one way it would be to the pass. They like to big play you with the past and they have the athletes to do it.”

Trying to throw downfield is something not a lot of teams, if any, have had success doing this year against Memorial.

“Our guys know what they are up against,” Harrison said. “I like our chances with our defense against anybody.”

Harrison’s offense counters with a team that racked up 431 yards against Porter and scored three times in the first 11 minutes of the game.

All phases of Memorial’s game have been pushed through intense practices this week. The reason for the incline in fire at Memorial’s practice is that Harrison is not ready to go home yet.

“I know how it feels to not be playing football right now after back-to-back years missing the playoffs,” Harrison said. “I never want to feel the season ending. Nobody likes that and we are working extra hard to make sure our season continues after Saturday.”

Gabriel Pruett has worked with both the Port Arthur News and Orange Leader since 2000. A majority of the time has been spent covering all aspects of Southeast Texas high school sports. Pruett's claim to fame is...being able to write his own biographical information for this website.

LU can add to statement out west

By now, Lamar has captured the attention of men’s college basketball powers on the West Coast with its 63-60 win... read more