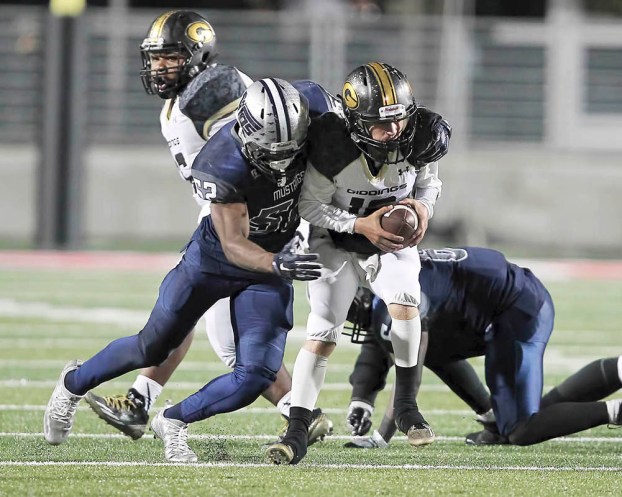 WEST ORANGE — Push could come to shove Friday night as two undefeated Class 4A Division II state semifinalists will duke it out at NRG Stadium.

The defending state champion West Orange-Stark Mustangs (14-0) take on the Geronimo Navarro Panthers (14-0) at 7:30 p.m. for the right to advance to the Class 4A Division II state championship game next week.

The Mustangs defeated Celina 22-3 at NRG, home of the Houston Texans, in the title game last year.

The Mustangs have dominated opponents throughout this season, including roughing up Giddings 48-5 in the Region III final last Friday night. WOS has outscored opponents 738-56 for the season and 217-26 in the postseason.

‘The kids are in a good frame of mind,” said Mustang coach Cornel Thompson. “Beating Giddings gave us the right to play 48 more minutes, and that’s the mindset we have to have.”

The Panthers, meanwhile, have been nearly just as impressive. Coach Les Goad’s Navarro bunch has outpointed the opposition 658-171 for the season and 202-69 in the playoffs. The Panthers handed Cuero (13-1) a 35-21 loss in the Region IV final in what many thought was a mild upset.

Navarro has gone 46-5 since the 2013 season. Three of those losses came at the hands of Cuero in the playoffs.

“Navarro is one salty bunch,” said Thompson. “They’re big and physical on both sides of the ball and they come right at you. Beating Cuero was such a big win for their program because Cuero knocked them out the last two or three years. They are certainly going to be fired up for us, count on it.”

Navarro, District 13-4A champion, runs an offense that the Mustangs have certainly seen before this year, a power running game out of the Slot-T.

“They’re going to what they do, and they do it well,” said Thompson. “They are definitely a power team. They like to run off-tackle but they also like the buck sweeps and the isos [isolation plays]. They also throw the ball a little more than your traditional Slot-T teams.”

“They have some talent n the backfield,” said Thompson. “Their fullback [Wright] is a load on both sides of the ball. He was the Defensive MVP at linebacker out of their district two years in a row. Their tailbacks [Leal and Law] are versatile and they play both ways too. They are strong up front, led by juniors Colton Barnett and center Garrett Dietert.”

Panther junior quarterback Will Eveld has been adequate as well, completing 71-of-127 passes for 1,300 yards and has rushed for 198 more.

Dean Wallace is their leading receiver with 25 catches for 461 yards. Law and Leal have combined for 27 catches for 521 yards out of the backfield.

“The Eveld kid has started since a freshman and is a leader,” said Thompson. “He’s got a good arm and is calm. The one thing about them too, they like to grind you down and ball-control you and they love to go for it on fourth down. They’re scrappy and they remind us a lot of Vidor and what they like to do.”

Thompson is also wary of Panther defensive back Garrett Weaver, who returned a kickoff for a touchdown against Cuero and also had the key play of the game, returning an interception 94 yards for a score as Cuero was deep in Panther territory late in the fourth quarter.

The Panthers will face, without a doubt, Class 4A’s top-ranked defense in the forms of the Mustangs. The Chain Gang defense has piled up eight shutouts. WOS is allowing a mere 121.2 yards a game after allowing a solid Giddings unit to 146 last week. Opposing running games have mustered just 1,212 yards on 558 carries this season, averaging just 2.2 yards a carry. Opposing quarterbacks have completed just 58 of 164 passes for 485 yards and 14 interceptions.

“We know the kids have faced this style of offense so much this season, but Navarro, they’re a completely different beast,” said Thompson. “They are in the state semifinals for a reason. We’re going to need to meet their physicality.”

Defensively, the Panthers have four shutouts to their credit and are allowing just 12.2 points a game.

The Mustang offense has certainly been churning on all cylinders of late with over 400 yards in each of their last two games.

Quarterback Jack Dallas surpassed the 2,000-yard mark for the third straight season in the win over Giddings in which he threw two touchdown passes and ran for three more.

The Mustang offensive line, which has allowed Dallas plenty of time to scramble, especially in the postseason, has been effective for a red-hot Mustang running game.

“Offensively, we’ve been really productive of late,” said Thompson. “We’ve got to continue to play smart and use all of our kids, like we have been, to keep our opponent guessing. We can’t afford any turnovers, which we’ve done pretty well thus far, and not get those silly penalties that set you back.”

“There is always that third phase that you can’t overlook,” said Thompson. “We like what we’ve got as far as our return game. Navarro, they have excellent special team units too.”