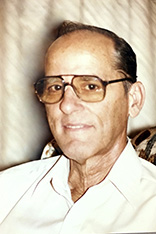 Charles Donald Elliott, Sr. went to be home with the Lord on January 22, 2017 at the age of 87. Also waiting for him in Heaven is his beloved wife of 67 years, Jeanne Schlegel Elliott.

He is survived by his children, Donna Mason of Groves, Nancy Burditt of Austin, Charles Elliott, Jr. of Nederland and David Elliott of Little Rock, Arkansas.

Charles was born on September 17, 1929 at Mary Gates Hospital in Pt. Arthur and was a 1947 graduate of Thomas Jefferson.

Charles started working at The Texas Company (Texaco) after graduation then joined the Navy in 1949. He was stationed in Jacksonville, Florida and served on the Coral Sea until 1952. He married Jeanne after they met at the Cotton Carnival in Memphis, Tennessee while he was on Navy leave and she was on her senior year band trip. They were married on December 19, 1949.

After being honorably discharged from the Navy, he continued working at Texaco for 47 years then took a job with King-Wilkinson Refinery in Kaduna, Nigeria.

After Charles retired, he and Jeanne sold their home, bought an RV and began a six year ministry with Campers on Mission. They logged 36,976 miles (yes he kept track of every mile!) traveling to over 100 cities in the U.S. and Canada visiting friends and family and doing mission work. The last place the RV took them was to Washington Street in Groves where they began their active membership at First Baptist Church of Groves where Charles served as a deacon.

He was predeceased by his parents Charles David and Lillie Mae Elliott and granddaughter Ashley Mason.

A visitation for family and friends will begin at 10:00 a.m., Saturday, January 28, 2017 at Levingston Funeral Home in Groves followed by the funeral service at 11:00 a.m., with Dr. Joe Worley and Reverend Charles Miller of First Baptist Church of Groves officiating. Burial will be at Memory Gardens Cemetery.

The family would like to thank Joe Worley, Charles Miller and the members of First Baptist Church of Groves for their love and support.

In lieu of flowers, donations can be made to the benevolence fund at First Baptist Church of Groves.