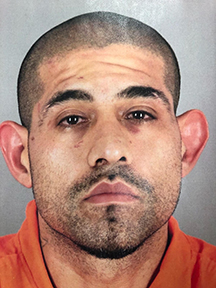 Armando Negrete, who evaded police for a week, is now in custody.

Police are continuing their search for Armando Negrete, 36, of Port Arthur who eluded officers several times this month and led them on a high-speed pursuit Sunday.

Negrete is wanted on two burglary of a habitation warrants with bonds totaling a combined $1 million.

His latest brush with the law began Jan. 2; officers were about to arrest Negrete at a home on 64th Street when a physical altercation ensued and an officer was knocked to the ground, Port Arthur Police Det. Mike Hebert said. By the time officers entered the home, Negrette had already left by the back door.

“Deputies with the sheriff’s office found an AK-47 in the home and the homeowner said it was not his. They also found during their search an ankle monitor,” Hebert said.

Ankle monitors are typically worn by people on parole or probation.

Negrete next encountered law enforcement around 8:30 a.m. Sunday after a concerned citizen notified police that Negrete was in Port Acres.

Officers went to the area and saw the vehicle Negrete was reportedly using but he drove away. He was found on 65th Street and Jade and as officers approached they noted some sort of physical altercation happening inside the vehicle.

“At one point the driver of the vehicle was either pushed out of the car or voluntarily jumped out at which time Negrete jumped into the driver’s seat and led officers on a high-speed pursuit,” he said.

The woman who was either pushed out or jumped later told police that during the traffic stop Negrete told her to “go, go” but she refused.

The chase went from the Port Acres area to Texas 73, where Negrete reportedly drove eastbound in the westbound lanes until he reached the Twin City Highway exit with officers still in pursuit in the correct lanes of travel.

An officer going through the intersection near 39th Street hit the rear of another vehicle during the incident, which was when they lost sight of Negrete.

Within minutes of the accident, police received information from a person in Griffing Park that a vehicle had just driven into his front yard. The vehicle was the same one Negrete had used in the chase. They searched the area but did not find the suspect, he said.

Additional charges are pending for Negrete for unauthorized use of a motor vehicle, evading detention in a motor vehicle and other charges such as assault on a police officer.

Police encountered Negrete on Sunday night after the criminal investigations division received a tip that Negrete was at a local game room. Officers attempted to get out on foot and enter the game room but didn’t know Negrete was sitting in a nearby vehicle. When he saw officers approach, he sped away and eluded capture.

Negrete has an extensive criminal background. He is described as 6 foot tall and 200 pounds. Anyone who sees Negrete or knows of his whereabouts is asked to call the PAPD at 983-8600 or Crime Stoppers of Southeast Texas at 833-TIPS (8477).

“The past two years have been an unmitigated success for the country,” U.S. Sen. John Cornyn, R-Texas, said on the... read more