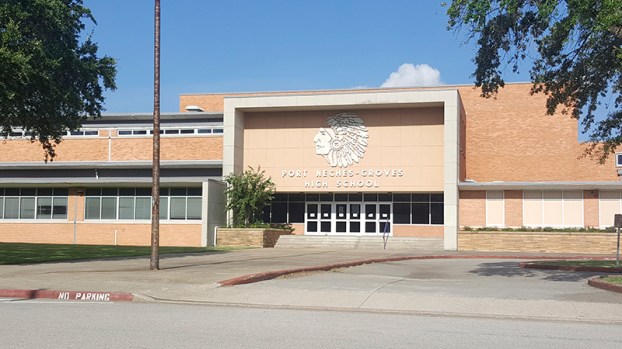 Boyter said the plans are a refined version of last week’s day one launch meeting involving district administration, leaders in the community, student and teacher input.

Day two of the launch (April 17) will include broad conceptual building plans for inside the new Port Neches and Groves Intermediate campuses at the Woodcrest Elementary and West Groves Educational Center sites. The exterior of the building will be designed later in the process.

The meeting is usually conducted in person, but moved to a virtual platform to comply with social distancing guidelines.

“We showed everyone about five different concepts to gauge what they like and didn’t like,” Boyter said. “Next Friday we will be coming back with the refinement from everyone’s feedback. We call that the day two of launch.”

Boyter said the architectural firm plans to continue moving forward in the process while complying with state and federal restrictions.

“We are blazing ahead as if we didn’t have these issues,” he said. “We’re having regular meetings remotely at least twice a week. Things are still moving forward as well as they can. We may come into roadblocks, but right now we don’t see any foreseeable obstacles, so we’re trying to stay on pace.”

Boyter said all those involved with the process were engaged and shared progressive feedback.

“The process was very positive and energetic,” he said. “People got a break and to come together again. Everybody enjoyed it.”

“Like everybody, we don’t have that face-to-face contact,” Whittle said. “Everybody talks at the same time in a teleconference call rather than one at a time during an in-person meeting, but we are really just trying to stick to the same schedule. Right now, a lot of the work is in our architect’s hands.”

Gauthier said the district is excited to be moving forward.

“We are doing everything we can to follow the timeline,” she said. “We have a great schedule and we want to stick to that, whether it’s in person or virtual.”

PNG passed the $130 million bond in November, condensing the seven elementary campus layout down to four.

District officials have said they are hoping to break ground on the campuses by December 2020 and have all campuses under construction by 2022. A projected timeline shows students will begin transitioning into new campuses between 2022 and 2024.