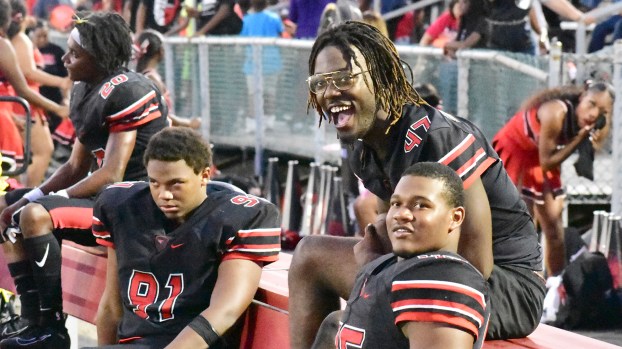 Jordan Thomas has made his decision. The Memorial junior defensive end committed to the University of Texas on Saturday.

“I think it’s a good fit for him,” Memorial head coach Brian Morgan said. “They did a good job, as well as plenty of other schools that did a good recruiting him. I think his mom and his grandfather felt good about the coaches there, and I think he’ll be a very good player.”

Texas’ Muslim student association has also done charity work during their pilgrimages, in which Thomas is looking forward to participating.

“Last year I think they built a basketball court over there, and they were helping feed the hungry over there too,” he said.

The other reason was a quote from Texas head coach Tom Herman: “State on my chest, family on my back.”

“When he said that to me, it really touched me,” Thomas said.

Thomas had been considering several schools, such as Texas A&M and LSU, but he’s now glad to be able to focus his attention on getting ready for Texas.

“It took a lot of weight off my shoulders, and I get to think more about my future only on one school and one school alone,” Thomas said. “I’m really thinking about it every day and it’s really getting me stronger and getting me mentally prepared for college.”

Thomas missed nearly all of the 2019 football season after an ankle injury in the first game left him sidelined. Thomas underwent surgery and is now doing much better, Morgan said.

“He came back well from it, rehabbed and did a good job on that end,” Morgan said. “We’re excited to have him back for this fall.”

Thomas is still considering the kinds of classes he will take, which may include psychology and even music.

“If I’m mad or irritated, I turn to music just to calm me down,” he said. “I wrote a couple of songs myself, so I feel like I want to get closer to music the best way that I can.

“It’s just one step away from taking care of my family and having a successful future for myself.”