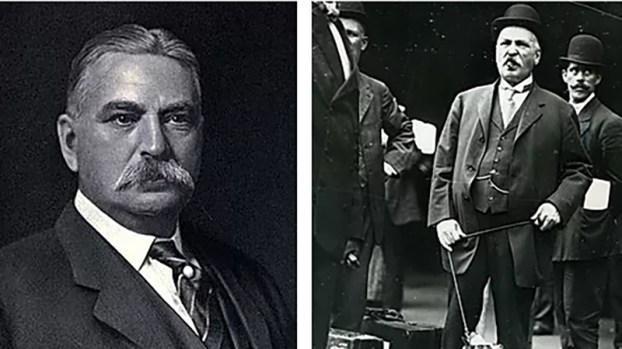 The Museum of the Gulf Coast recently alerted me via a Facebook post to the birthday of one of Port Arthur’s more colorful characters —industrialist John W. Gates.

The man who would later be known as John “Bet-a-Million” Gates was born May 18, 1855, in Illinois and raised on a farm. Who knew this risk-taking man would later help the city of Port Arthur in its early days?

Gates began his career selling barbed wire for the Washburn-Moen Company in 1876, according to information from the Museum. 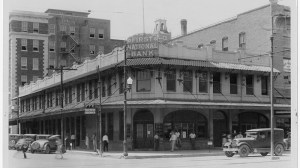 First National Bank building on the northeast corner of Procter Street and Austin Avenue in Port Arthur. (Courtesy The Portal to Texas History/Museum of the Gulf Coast)

“On his arrival in San Antonio, he set up a corral and invited ranchers to bring in their meanest fence-busters to prove his barbed wire would hold them. The demonstration was a success, and Gates received more orders than Washburn-Moen could fill.”

He was refused a partnership but that didn’t stop him. He quit his job and began manufacturing and distributing un-patented barbed wire in St. Louis. Court orders couldn’t beat him and he formed numerous companies including Republic Steel.

Gates’ life seems like it’s lifted from a movie. Another of his investments was in Arthur Stilwell’s Kansas City and Southern Railroad, which he later took over.

“His most lucrative investment was in the Spindletop oil field, which resulted in the Texas Company, now Texaco,” according to the Museum and historical accounts.

“Gates was fond of risky wagers, earning his nickname ‘Bet-a-Million’ from his proclivity to bet on anything, such as which raindrop would roll down a train window fastest. He famously bet $70,000 on a horse race, walking away with $600,000. When his gambling upset his wife, he would placate her by giving her diamonds (which he habitually carried in his pockets).”

He was instrumental in having Port Arthur declared an international port of entry.

Port Arthur Business College later became Lamar State College Port Arthur and St. Mary Hospital was in existence for 89 years before the decision was made last summer to shutter the five-story facility and adjoining offices.

Gates’ estate at the time of his death was $40 million to $50 million (more than a billion in 2016 dollars). His wife contributed funds to build the Gates Memorial Library in memory of her husband and their son, Charles, which is now part of the LSCPA campus.

Every so often it becomes necessary to take a slight detour from the usual path of the weekly golf column.... read more