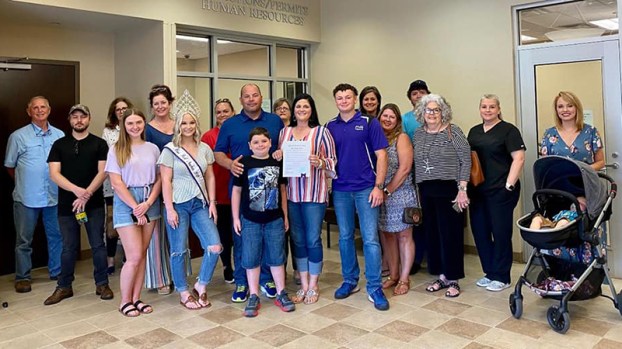 PORT NECHES — Kelly Plante will forever be celebrated in the City of Port Neches after Thursday’s council meeting resulted in a proclamation declaring May 21 “Kelly Plante Day.”

The mother of two was honored for her efforts in creating, organizing and managing the 2020 Port Neches-Groves Adopt-a-Senior program, noting that each senior was adopted three times.

She is also a dedicated volunteer for Port Neches Riverfest, spending countless hours to ensure the success of the event every year. 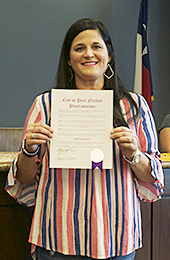 The proclamation states: “Plante is widely recognized and appreciated throughout the City of Port Neches and surrounding communities for selfless and faithful giving of her time, energy and resources.”

Mayor Glenn Johnson said the City of Port Neches is honored and proud of the accomplishments and selfless service given by Plante day in and day out.

“Because of COVID-19, the seniors’ year was interrupted and Kelly was one of the local moms who has a senior fixing to graduate and decided we, as a community, needed to do something for those seniors,” he said. “She started the successful adoption program and she’s done many other things in the community. She even dressed up as the Easter Bunny for kids to drive by and wave to during the pandemic. She’s just been a tremendous asset for the City of Port Neches and the whole community.”

Johnson said he felt it was important to recognize Plante officially.

“The way you do that in the city is through a proclamation, so we declared it, ‘Kelly Plante Day,’” he said. “All the people that showed up to the council meeting to see her, that goes to show you the support that she has. She’s well thought of and she is just a really wonderful lady.”

Plante, who also received the title “Mother of the Year” for 2020, said once again she is speechless.

“I am so honored to have a day in my name,” she said. “I love this community and I have so much appreciation to everyone involved, with special thanks to my Mayor and his amazing wife, Mrs. Andrea. I’m so thankful for everything that you both do for Port Neches. Everyone that has supported me, thank you. I am who I am today because of each and every one of you. I’m honored, blessed and thankful.”