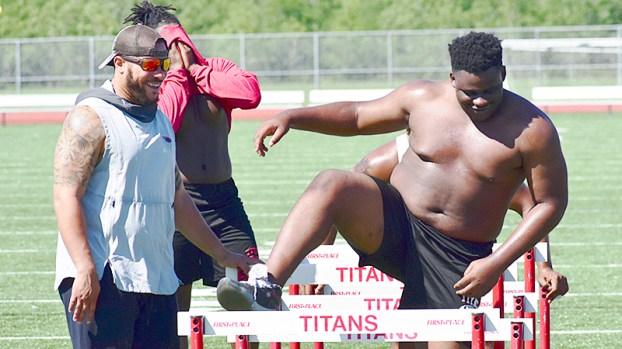 Memorial High School implemented a new requirement Wednesday that all of the athletes participating in summer workouts wear masks while indoors at the school.

Jefferson County Judge Jeff Branick announced on Tuesday details of a new order that requires everyone in public to wear a mask, and for all commercial entities to require employees and customers to wear a mask while indoors.

Memorial Athletic Director Brian Morgan said the school is encouraging athletes to bring their own masks, but he has a few given to him by the school district for use by athletes that don’t have one.

“We told them to bring one, and the district also provided me some masks so we made sure that if they didn’t have one of their own we’d provide one to them,” Morgan said. “For the most part I’d say probably 75 percent brought their own today, and we made sure the rest of them had one.”

Memorial is requiring athletes using in their weight rooms and gyms to wear masks for all indoor activities.

Morgan also said the athlete who appeared to have a low-grade fever while at a workout session on June 18 hasn’t been tested for COVID-19, and that the volleyball, girls basketball and girls soccer programs will likely wait all 14 days before resuming summer workouts.

Neither Nederland nor Port Neches-Groves ISDs implemented a requirement to wear masks while working out indoors.

PNG Athletic Director Brandon Faircloth said the orders issued by the county seemed to apply mainly to businesses, instead of the school districts.

“(Branick) didn’t say anything about schools,” Faircloth said. “It’s mainly about businesses and that’s not really us. It’s still a little different with us. We know who’s coming in every day, and it’s a regular schedule. Businesses don’t know who’s coming in. I feel like we have a lot more control over who’s in and out.”

“The guidelines were set out to be worn in public places and we’re an independent school district,” Barrow said. “We’re not considered public so that doesn’t apply to our buildings or our areas, so to speak. At the same time our administration keeps tabs on all those guidelines that are put out, exactly how they’re worded and what they’re saying. If they feel like it needs to be implemented in our independent school district, then they can make the call, as well.”

Faircloth believes the guidelines set up by the University Interscholastic League are serving well to keep athletes safe.

“We’re social distancing at all times,” he said. “I think the protocols UIL has set in place are really good, and we’re going to stick with those.”

Barrow said he and his staff are ready for any changes in policies that my come.

“We’re still on a day-to-day basis,” he said. “We’re playing it by ear. If we have to do it, then we’re going to adjust and overcome and move forward. We expect the unexpected these days.”