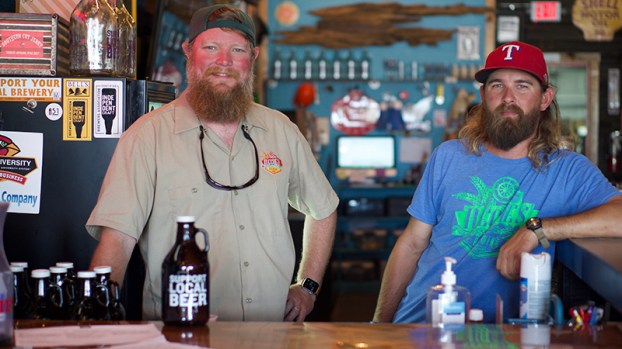 Neches Brewery Co. owner Tyler Blount, left, and musician Thomas Teague, right, posed for a picture on May 11, a week before the brewery reopened after two months of closure. (Cassandra Jenkins/The News)

Gov. Greg Abbott is shutting down some businesses and restricting others.

All Texas bars and similar establishments that receive more than 51 percent of their gross receipts from the sale of alcoholic beverages were required to close at noon Friday.

These businesses may remain open for delivery and take-out, including for alcoholic beverages, as authorized by the Texas Alcoholic Beverage Commission.

Bars closing in Mid-County include the Neches Brewery Company, which only reopened May 22.

Neches Brewery owner Tyler Blount was on a mini-vacation with his family at Crystal Beach when he heard the news Friday morning.

“We got up this morning drinking coffee and, no notice or nothing, we have to shut down again,” he said. “We can still do to-go orders and fill growlers, but that’s not enough revenue to even cover the electricity bill. We’re the only business shutdown, not restaurants, hair salons, gyms or anything. Everything’s still open but the bars.” 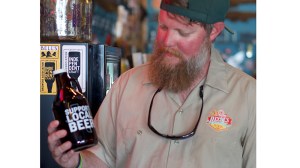 Blount said the ruling is unfair and frustrating to all bar owners.

“All the hard work we’ve done to recoup from the first time, it’s going to go away,” he said. “What sucks about it is that we are following the rules. We are doing everything possible right just for us to shutdown again.

“It’s unfair that you can just pick and choose who can stay open. What is this going to do? Shutting down just the bars is not going to do a damn thing because everything is still open. There is no rhyme or reason and it sucks.”

Restaurants may remain open for dine-in service, but at a capacity not to exceed 50 percent of total listed indoor occupancy, beginning Monday (June 29).

For those on the cusp between bar and grill, maintaining the limit is critical.

Dylan’s Bar and Grill, 8601 Ninth Ave. in Port Arthur, is a local hotspot with an outdoor patio made for drinks and live music.

Day manager Lindsey Begnaud said while they are well under the 51 percent alcohol rule during the day, there are changes pending for the night shift.

“During the day we’ve always had a big lunch crowd,” she said. “We extended our menu last year, so we don’t have that much drinking during the day. We’re going to discuss how to handle it for the nighttime.”

“We might have to close earlier,” Begnaud said. “We may consider closing when the kitchen closes to keep the alcohol percentage below 51 percent.”

Downsizing from the previous 75 percent, Dylan’s is preparing for the decrease by removing chairs, increasing social distancing measures and intensifying sanitation.

“Everyone has to have their masks on,” Begnaud said. “We have eliminated half the chairs around the bar. Every other table is closed to keep a 6-foot distance. There is allowed no more than six in a group. The outside patio, we are only going to allow six people max. We sanitize each section, tables and chairs, before the next person is allowed to sit down.”

As news spreads across social media of businesses closing, the community is responding with shock, support and disbelief.

A Port Arthur resident and frequent customer of Neches Brewing Co. had a message for Governor Abbott.

“Dear Gov. Abbott,” David Webb posted in the comment section of the breweries closure. “Don’t you think that the numbers may be going up in part due to the fact that more people are being tested and thus more asymptomatic people previously exposed to the virus are being detected?

“This virus isn’t going away. Closing businesses is only going to postpone the inevitable. Leave us alone. Let people make a living.”

The executive order limiting certain businesses and services are part of the state’s effort to contain the spread of COVID-19.

Other restrictions dictate rafting and tubing businesses to close.

This decision comes as the number of people testing positive for COVID-19 and the number of hospitalizations have increased and the positivity rate in Texas increased above 10 percent, which Abbott previously stated would lead to further preventative action.

The targeted, measured directives in the executive order are based on links between certain types of businesses and services and the recent rise in positive cases throughout the state.

The Spindletop Center, in partnership with the Port Arthur Police Department, branched out to feed the homeless and distribute essential... read more