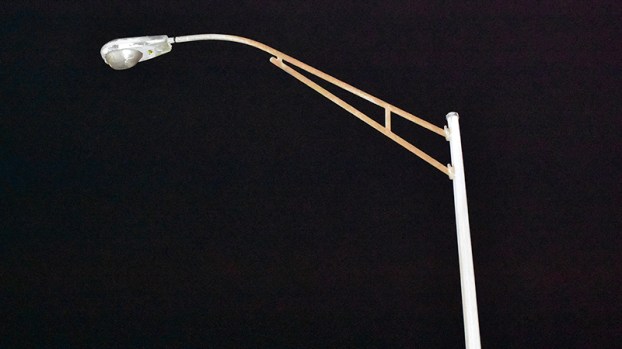 A street light on Memorial Boulevard was dark on July 7. (I.C. Murrell/The News)

Streetlights throughout Port Arthur that do not require underground boring should be repaired by this weekend, an Entergy representative said Thursday.

Ron Fletcher, Entergy’s customer service manager, said the power company is conducting a “streetlight patrol” in which all lights that are out will be worked on this weekend. He added city leaders gave him a list of more than 500 lights that have gone dark.

“We have contractor crews coming in and more coming in this weekend to work on that list of over 500,” Fletcher said, adding more than half of those lights have been repaired.

His response comes after Port Arthur councilmembers called out Entergy for what they considered a lack of service on streetlights through the city that have been out for a long period of time. Fletcher said he met with City Manager Ron Burton, District 3 Councilman Thomas Kinlaw III and Public Works Director Alberto Elefaño via videoconference Wednesday.

Fletcher confirmed most of the streetlights from that list are among almost 5,200 that Entergy owns in Port Arthur.

“Some of them, we have to put our eyes on all the lights that need to repaired or at least looked at,” he said.

According to numbers Kinlaw provided during Tuesday’s city council meeting, Port Arthur owns 554 lights, with 151 of them confirmed out, 228 unknown and 169 working as of June. The city, Kinlaw said, pays $41,000 to $55,000 per month for service to the lights.

Kinlaw said he and other city officials met with Entergy a year to 1½ years ago about the outages, citing an outbreak of crime in the city.

“We’re well aware of the importance of security in streetlights in the city,” Fletcher said. “When they go out, there’s an urgent need and we work toward keeping all streetlights on, but there are a number of factors that may cause lights to go out.”

Those factors, he added, could include drivers running into poles, aging underground cables, lightning hitting pieces of equipment and impacting other lights downstream and normal wear-and-tear.

Fletcher said Entergy’s top priority is repairing the lights from the list that the power company owns. As Entergy crewmembers see other lights that have gone dark, the company will try to repair those over the weekend as well, he added.

Asked where the majority of the dark lights are located, Fletcher said the poles are “throughout the city.” 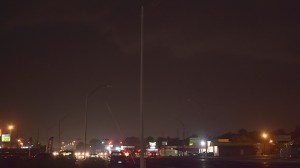 Street lights near the intersection of Memorial Boulevard and 25th Street are dark on July 7, but taller lights near the Memorial-Texas 73 cloverleaf can be seen shining brightly in the background. (I.C. Murrell/The News) 7-7-20

During Tuesday’s meeting, Burton and councilmembers accused Entergy of taking too much time to service streetlights.

“We cannot use COVID as an excuse because the conversation is ongoing and more momentum should have been on the part of Entergy,” Burton said. “We need to make more steady progress, and we need to put the pressure on Entergy to make sure they deliver for our citizens.”

Burton did acknowledge some changes are being made to installing LED, or light-emitting diode, poles, given the volume of dark lights throughout Port Arthur.

Asked about service delays, Fletcher named two main factors, including storms that come through the city and stretch Entergy’s resources and additional testing to each light rather than just replacing a light bulb, which takes more time.

“There are a number of factors to consider. They’re not excuses,” Fletcher said.

He confirmed Entergy has installed LED lighting on Procter Street and Woodworth Boulevard. Lights located on Memorial Boulevard just north of Woodward are owned by the city, he said.

While Entergy will try to repair the LED poles it owns, Fletcher said, LED lighting won’t be installed in uniformity throughout just yet.

“First and foremost, let’s get the streetlights that are out repaired,” he said. “… We are going to try to add LED lights repaired, but there won’t be a uniformity yet. The long-range plan is to provide the city with LED lights.”

“The lights in our city that are our responsibility, they need to be fixed,” Doucet said. “You control our staff. We provide resources. Someone can’t fix these lights and get on them, and if there are that many out, it should be a priority they should be working on, if they’ve got to work on weekends to get these lights fixed. There’s no excuse for not providing it, those that we control.”

Doucet also suggested the city shouldn’t have to pay Entergy if its dark lights are not replaced expeditiously, adding Entergy’s service has been “unacceptable.”

“So, maybe we don’t send our money, then they’ll get the message that you better fix some lighting and give us the service because we’re paying for service,” Doucet said. “They’re not on their own time.”

The Port Arthur Independent School District was amongst one of the first districts in the Golden Triangle to announce a... read more