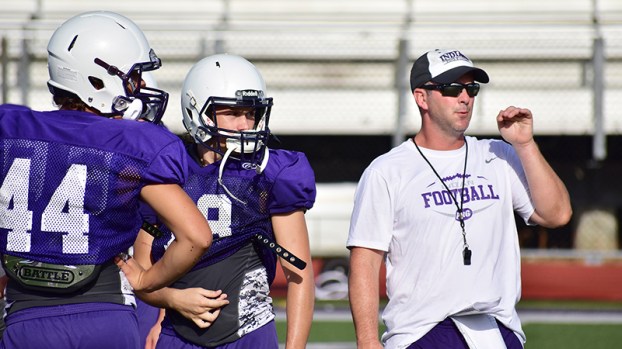 Dustin Templin, who for 11 years assisted Brandon Faircloth on the Port Neches-Groves football coaching staff, has departed as the Indians’ defensive coordinator and taken the same position at Hondo.

For Templin, the move is a family matter.

“We just want to be closer to family, that’s the bottom line,” he said. “Our families live in central Texas and that was really why. I have young kids. Having them be around their grandparents and having help from the grandparents, that’s a pretty big deal.”

Templin is originally from Belton, which is just an hour north of Austin. His children are ages 7 and 1.

Hondo belongs to District 15-4A Division II and is west of San Antonio.

Templin will miss the community at PNG the most, he says.

“They’re great people, a great community, great staff,” he said. “Coach Faircloth’s awesome. He’s an incredible coach, boss and mentor of young men. The community is like none other. The support from the administration at PNG and from the community of PNG is like none other. It was unbelievable, and it was very tough to leave that, but it was a personal family decision for us.”

Faircloth hired Templin to his coaching staff in 2009 shortly after arriving at PNG.

“He’s a really good coach, cared about the kids and would do anything to help them be successful,” Faircloth said. “Anytime you have guys like that on your staff, kids love playing for them. It was a tough loss. He chose to go somewhere else and that’s part of the coaching business. All we can worry about is wishing him the best and moving on. Our kids did a great job this summer doing that.”

Linebackers coach Jayce Nelson is taking over as defensive coordinator.

“Coach Nelson’s been coaching our linebackers for the last two years,” Faircloth said. “He played for me here at PNG in 2010. He was an All-State wide receiver for us. But just like anything else, the defensive coordinator is definitely an important part, but the game plan and everything else will always fall on our entire defensive staff.”

Templin has had the opportunity to meet his players at Hondo, which has been able to continue workouts throughout the COVID-19 pandemic.

“It reminds me a lot of PNG, just a little bit smaller, and that’s one of the things that attracted me to it,” he said.

“Everywhere as a coach you’re a product of the environment you’ve been in, and obviously we were very successful at PNG, at least I like to think we were. I’m going to take everything I learned there and bring it over to Hondo.”

“Maybe some day when my kids are a little older I might come back to Southeast Texas,” he said. “It’s a great place.”