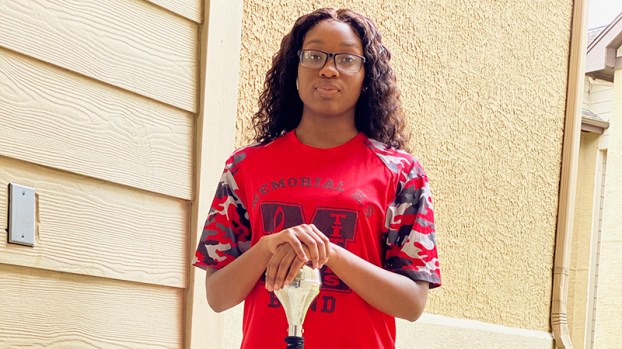 The Port Arthur native’s recent proudest accomplishment is landing the title of the youngest drum major for the Memorial Titan band.

“I wasn’t expecting to be chosen for the position because I am only a sophomore,” Bullard said. “I went up against two juniors, who are amazing, so it was unbelievable, but absolutely one of my proudest moments.” 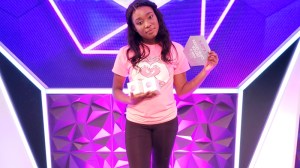 Bullard has been a part of the band program since fifth grade. She played the flute and became drum major at Thomas Jefferson Middle School before high school.

“I enjoy band because I find it interesting that you can take all of these separate instruments, a sheet of paper with notes on it and create something beautiful,” she said.

Bullard knew she wanted to be drum major because leadership runs in her bones.

“I like being a leader,” she said. “It comes to me naturally. I get to not only help myself, but also help others grow in their positions.”

In middle school, Bullard also played basketball and participated in UIL poetry and spelling before her schedule started to become too hectic.

She chose to pursue her two favorite passions instead — music and dance.

Alongside being a drum major, Bullard is also a leader on the dance floor of Debbie’s Dance, etc. in Groves.

“It’s unheard of that I’d allow a student her age to teach a class,” she said. “I decided this year to let (Amari) try while I monitor the class. This past week was her first class, and she just did a fantastic job. The kids really responded to her and she’s done great. She’s very smart, dependable and we can always count on her to give 100 percent.”

Bullard joined the dance team at the age of 10, later than most students.

It took Bullard little time and effort to catch up.

“As a student, she’s just totally exceled,” Broussard said. “She started dance later than most students, as in she didn’t start as a 4-year-old in baby ballet, but she immediately caught up to where she needed to be. She’s just amazing.”

For Bullard, dancing is another form of expression.

She started competitive dancing two years ago, and the reason she joined is because she wanted to have something else she was good at.

“I started taking classes and started to grow as a dancer,” she said. “I came to really enjoy it.”

Expression is something Bullard struggles with.

“I’m not good at expressing myself through words,” she said. “Through dancing and music, it’s my way of saying what I need to say.”

To remedy her bond with the spoken language, Bullard is joining the debate team at Woodrow Wilson to learn how to effectively communicate.

“When I’m in class and I disagree with something, I speak to what I think, not necessarily what I know,” she said. “Debate is something that I feel is going to help me learn how to have that background and research behind those arguments. It’s also something that will look good on my resume when I graduate.”

Bullard is already looking ahead to her future.

“I like to feel like I am working towards something,” she said. “I don’t want anything easily handed to me. With education you have to work hard and if I accomplish getting valedictorian or being in the top 10 percent, that’s an accomplishment that I got for myself because I worked hard at it.”

Bullard’s short-term goals include controlling her procrastination and choosing a major.

“I created a schedule for myself,” she said. “It gets very stressful sometimes with my hectic schedule, so my main goal is to focus on my grades.”

The new sophomore is still three years away from graduation but is already debating a career between accounting and occupational therapy.

“I am very good at math, so I might go into finance,” she said. “But I also want to help people so it depends on where my mind goes off to as the years go by.”

Outside of education and a strong work ethic, Bullard is a girl who loves to sing, play the piano, write and draw.

She also pulls her inspiration from TV icon Oprah Winfrey.

“I admire Oprah because she used her platform to express herself and help other people at the same time,” she said. “She’s helped people my age have a voice and I’ve always admired that.”

GROVES — Drugs and property crimes top the list of most prevalent criminal concerns in the city of Groves, according... read more