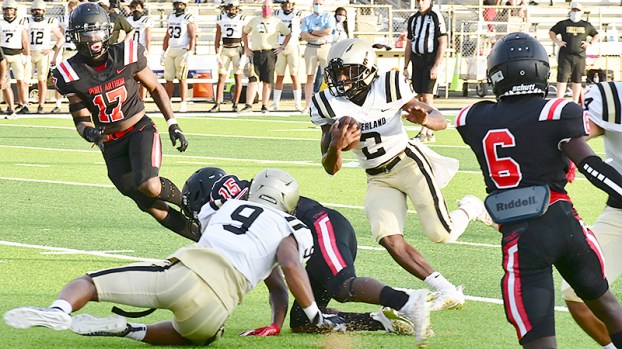 The Nederland football team is trying to stay focused after numerous positive coronavirus tests on the team forced the Bulldogs to cancel Friday’s season opener against Huntsville.

The Bulldogs canceled practice for Wednesday, Thursday and Friday as coaches and administrators try to “get a grasp” on the potential spread, Barrow told Port Arthur Newsmedia.

Defensive coordinator Chris Theriot said the players took the news as well as could be expected.

“This is something we always put in front of them,” he said. “We told them that there are certain things we can control and certain things we can’t control. They always knew that at any point in time something like this can happen. The teams that deal with that adversity this fall best will concur a lot more things.”

Theriot said the players were disappointed but understanding.

“When you work so long and it is finally game week, it is frustrating,” he said. “It’s like going to work all week and not getting that paycheck. They understand and care about their brothers going through this, but they also want to go perform in front of their school community and friends.”

The defensive coordinator said it would have been slightly easier if the team had to cancel the second or third game, but added canceling the season opener was pretty tough.

“We got to scrimmage a great team in Memorial and saw some positive things,” he said. “We wanted to be able to build off of those things. We were in pretty good game shape, and we would’ve been able to play another quality opponent in Huntsville. We would’ve learned a lot from playing a team like them.”

Nederland High School had 19 confirmed COVID-19 cases, Nederland Independent School District said in a statement Wednesday. The district declined to say how many of those cases were on the football team. The district had 28 confirmed cases across all campuses.

While practice had been canceled for the week, the players have stayed active and engaged during the athletic class.

“Once we knew we weren’t going to play Huntsville, we started building our practice schedule during the athletic period,” Theriot said.

“They are going home after class, but during the football class, we are working on situational football. It’s stuff that we may not be able to work on during the week because we are scheming for opponents. We just want to fix things that we can do better.”

Theriot said he believes the drills are helping keep the players focused.

“I know this morning, after we did our workouts, the coaches all talked about what a great practice it was,” he said. “We told them that during this time, one of two things is going to happen. You either get better or you get worse.”

Nederland coach on canceling opener: “I hate it for our kids”

The Nederland Bulldogs’ football home opener against the Huntsville Hornets was canceled after numerous student athletes tested positive for the... read more