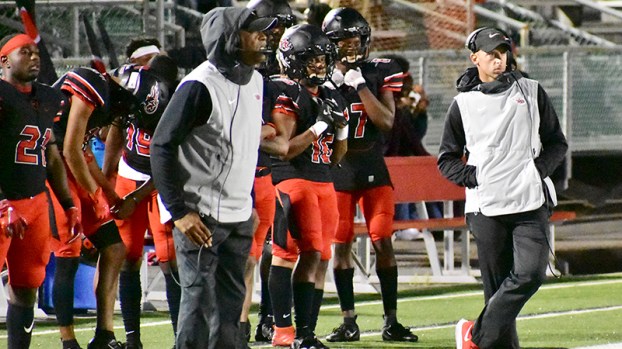 Prior to the announcement that the Nederland Bulldogs would cancel their season opener against Huntsville, Memorial head coach Brian Morgan was aware that any team’s season could be halted at any given moment.

The Titans are scheduled to open their season on the road against Port Neches-Groves tonight.

“It has been a lot of anxious times,” Morgan told Port Arthur Newsmedia on Tuesday. “With everything that is happening with games getting canceled all over the state, we’re hoping to get to Friday without an issue.”

The next day, the Bulldogs, whom the Titans scrimmaged a week ago, announced the season opener was canceled after numerous players tested positive for the coronavirus.

Morgan said his team had no plans to cancel Friday’s game.

“We’re relatively fine, health-wise,” he said. “Again, we say that in the COVID year and that can all change.”

Morgan said his team is ready to start their season against a worthy opponent in PNG.

“I think PNG always does a really good job,” he said. “With Coach (Brandon) Faircloth, they will play four quarters and be sound on both sides of the ball. They aren’t going to make mistakes. They force you to do the right things. We’re looking forward to it, but we know it is going to be a good test.”

Under Morgan, Memorial has been known to bolster a punishing defensive line. The Titans will go against three returning offensive line starters at PNG.

“They have a really talented quarterback,” he said of senior Blake Bost. “He is a really good player and he has some skill guys around him that are really good. Their coaches have always done a good job over there and they are doing the same thing now.”

Morgan said tonight would be a test of conditioning as it will be the first time either team has played four quarters.

“Neither of us have been in that situation,” he said. “We both have scrimmages, but our guys didn’t play a full game and you miss a week of practice (due to Hurricane Laura). It’ll be interesting to see in the second half how we fair on that end.”

“It’s a great non-district game for us,” Faircloth said of Memorial. “They will definitely prepare us for district. That is what you want your non-district schedule to do. We need tough teams to get us ready. They are very athletic with great offensive and defensive schemes. We are excited for the opportunity.”