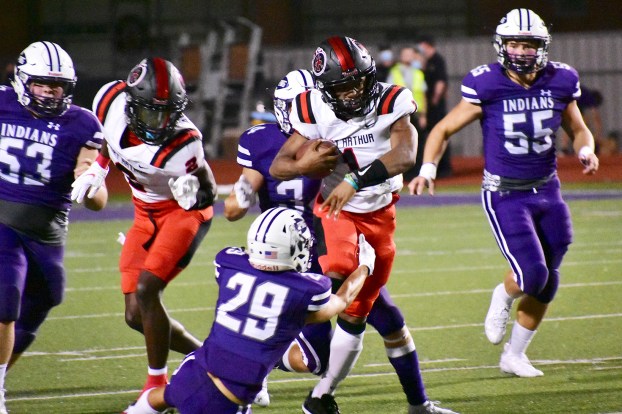 As a sophomore last year, Memorial quarterback Jah’mar Sanders was given the difficult task of leading a high school team as an underclassman.

Coaches typically do not give underclassmen that responsibility, but it was a decision head coach Brian Morgan made because of the unusual maturity he saw in Sanders. The now-junior quarterback has led the Titans to a 3-0 start with a 1-0 record in District 9-5A Division I after beating La Porte 26-3 Thursday.

Morgan praises his quarterback’s ability to not get too high or too low, adding you can tell by his mannerisms in the pocket.

“His eyes don’t really move around,” Morgan said. “I think he is a really good football player but a good kid, too. When other guys get frustrated during the game, I usually send him over there to talk to them. We had a couple times the other night and I asked ‘Where is Jah’mar? Get him to go talk to them.’ Sometimes they don’t react the same way to coaches. He’s super intelligent football-wise. He takes care of his business.”

Morgan said he hoped starting a sophomore at quarterback would pay off in the long run.

“We knew last year that we were going to try to shelter him a little bit and take a little lumps even though he was a good player,” Morgan said. “You go from freshman football to starting on varsity, that is a difference. You saw it at the beginning of last year. In the last four or five games, you could see that he was going to be really, really good.”

Sanders said the practice he put in during the offseason paid off.

Sanders said the game has also slowed down for him.

“I have a better feeling of the game,” Sanders said. “The game moves slower for me. Last year, the game was moving fast, but it has slowed down. When you are on the field, as the quarterback, you are nervous. You don’t know what the other team has in store for you. If you watch film, it makes it move slower. That is what I learned most as a junior.”

Every time Sanders steps on the field, he is one of the most dynamic playmakers. He has 349 yards rushing, 530 yards passing and nine total touchdowns on the season.

Sanders’ speed was on display against Port Neches-Groves when he took a quarterback option up the middle for 74 yards. He finished that game with 209 yards on the ground.

His best passing game came last week against Barbers Hill, when he completed 21-of-34 passes for 264 yards. Sanders was a perfect 4-for-4 on the Titans’ last drive, where he threw the go-ahead touchdown to give Memorial a 27-23 win.

“It’s tough on defenses when the quarterback can run,” Morgan said. “He doesn’t just sit back and throw it. He’s worked really hard over the offseason. We always knew he could run since he was a freshman.”

NEDERLAND — Southeast Texans are once again dealing with the aftermath of and picking up debris and making repairs. Like... read more