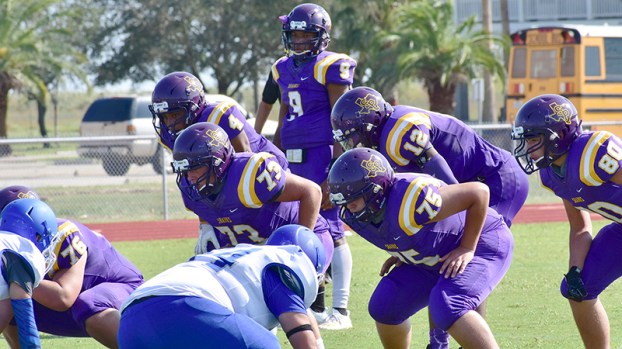 The Sabine Pass Sharks will look for their first win of the season when they travel to Deweyville today.

The game will kickoff at 2 p.m. at Pirate Stadium.

The game was originally scheduled for Friday but was pushed back a day after Hurricane Delta forced the Sharks to play Burkeville on Monday. University Interscholastic League rules dictate that teams must have at least five days’ rest between games.

The Sharks (0-1) lost their season and District 12-2A Division II opener against Burkeville 14-6.

Sharks coach Jason Thibodeaux said his team focused on penalties and execution after his team was responsible for 12 botched snaps in their first game.

After Monday’s game, Thibodeaux chalked the mishaps up to it being the first game of the season.

The Sharks’ defense, which forced three goal line stands against Burkeville, will have their hands full against a Pirate offense that has yet to score fewer than 30 points in three out of their last four games. Two weeks ago, Deweyville put up 50 points in a blowout win over Legacy Christian Academy in Beaumont.