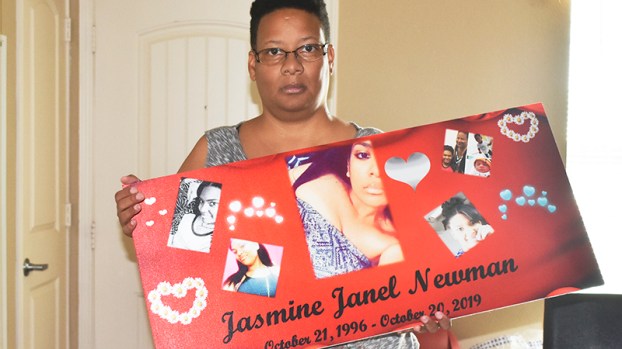 Jermel Newman holds a poster with photos of her daughter, Jasmine Newman, who was shot to death Oct. 20, 2019. one day shy of her 23rd birthday. (Mary Meaux/The News)

Jasmine Newman is gone, but police and family are working to ensure she is not forgotten.

The Port Arthur Police Department is holding a press conference this afternoon in the 1100 block of Vicksburg Avenue to draw attention to an investigation that has produced zero arrests and little in the way of suspect information.

Authorities have long stressed Newman was an innocent woman shot and killed while standing outside during a house party. She had no criminal record and was not involved in any confrontations prior to the fatal gunfire.

There is already a $1,000 Crime Stoppers award available for information leading to the arrest of Newman’s killer and various fundraisers are planned to significantly increase that amount in hopes of spurring public participation in the investigation.

Police are still searching for the gunman, who shot into a crowd of people at a party outside of a Port Arthur home in the 1100 block of Vicksburg, hitting four people and killing Newman.

Police have called the ambush-style shooting cowardly in that Jasmine, an innocent bystander, left behind a then 2-year-old girl and 4-month-old boy.

She had no criminal background and was not affiliated with any gangs nor was any of the others at the party, police said.

“I feel like this is a dream. I know I put her in the ground but my mind tells me different from my heart,” Jermel Newman said last year after the funeral. “Everybody else was shot in the leg, shoulder; she’s the one shot in the back and one in the head.”

Mother and daughter shared a multi-story apartment filled with love and laughter. Jasmine liked to cook and be with her two small children, bringing them to the park, reading with them, tending to their needs and showering them with love.

The grieving mother and grandmother recalled how Jasmine loved music.

“She used to run me crazy (with loud music). She would be in the bathroom in the tub in her own zone and the kids would be sleeping,” Jermel said last year, her eyes drifting off as if still in the moment.

Jasmine worked at a nearby Walmart — getting up during the night with the baby then going in to work by 5:30 a.m.

A 2015 graduate of Memorial High School, Jasmine had goals for the future. She wanted work as a prison guard to provide more for her children.

In the days following the shooting, Port Arthur Police Det. Mike Hebert said authorities received no tips from the public.

At the height of the party there were up to 50 people in attendance, and by the time the shooting occurred only seven were standing outside getting ready to leave.

Those with information about the killing can call the PAPD at 983-8600 or Crime Stoppers at 833-TIPS. You won’t be asked your name and may be eligible for a cash reward.

The 2020 census ended Oct. 15, but when the final population numbers will be revealed is not clear. U.S. Census... read more