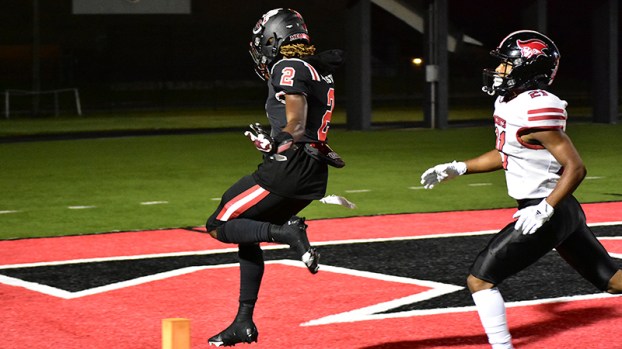 After a Port Arthur Memorial player inadvertently touched a punt that gave Goose Creek Memorial the ball on the Titans’ 39-yard line, the Patriots struck the following play on a touchdown scamper that pulled them within 7-6.

The Titans’ defense, which had just forced the Patriots to punt, was reeling. Giving Goose Creek Memorial the ball back without scoring could have changed the game, but Titans’ senior return man Tyrence Augusta had other plans.

“He made that play at a really crucial point in the game,” Titans head coach Brian Morgan said, “If he gets tackled and the offense goes three-and-out, it is a different game. He did a great job.”

Augusta credited Morgan with drawing up the return.

“He had everything set up for us in practice,” Augusta said. “It was just executing. Once he kicked it to me, I hit the hole as fast as I could.”

Morgan said the blocking is only as good as the return man.

“The guys did a good job blocking. He has to finish the run. They could block for me, and I wouldn’t score,” Morgan said laughing. “The guys take pride in getting better every week in special teams. It’s another chance to get Ty the ball. Most teams aren’t going to kick it to him and rightfully so. They did and he made them pay.”

The receiver said his eyes light up when teams do actually kick the ball his way.

“I get very excited,” he said. “I just get the ball and try to put points on the board for my team.”

Morgan said the receiver’s speed is matched only by his elusiveness.

Memorial coaches are constantly trying to find new ways to get the ball in the hands of one of their top playmakers, Morgan said.

“We try a bunch of moving him to running back and moving the receiver,” Morgan said. “I think the more he touches the ball, the better. I think he is averaging something like 15 yards a pop. He has big plays in him. We don’t want to only line him up at receiver.”

Augusta said he appreciates coaches trying to get him more involved and added he just wants to do whatever he can to help the team win.

“I always tell coach that I’m ready for whatever plays you need me, whether I’m at receiver, running back or even on defense.”

Morgan said Augusta is the fastest person on the team.

Augusta said Sanders and another track runner give him a run for his money, but he’d still bet on himself to win a race. Meanwhile, opposing defenders and special teams are likely hoping that they don’t have to find out how they stack up.