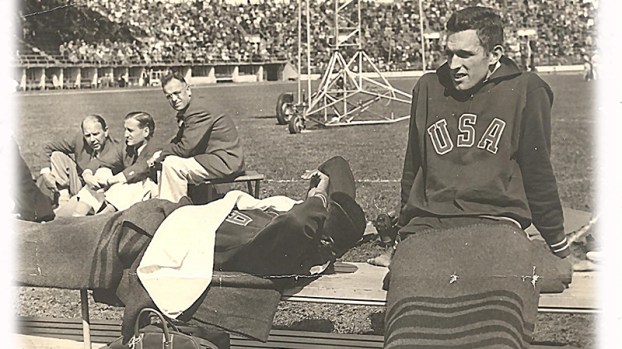 Buddy Davis stays warm during the high jump competition at the 1952 Summer Olympics in Helsinki, Finland. (Courtesy of Museum of the Gulf Coast)

The 1950s were very good to Nederland native Buddy Davis. 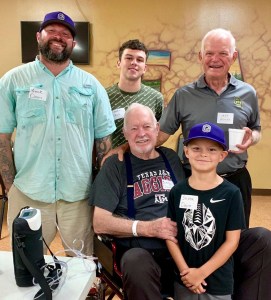 Davis, who spent five seasons in the NBA and added a second championship with the St. Louis Hawks in 1958, died Tuesday in Port Arthur. He was 89.

“He was just curious about everything,” Shaun said of his father. “He just read all the time, so he was a curious person. He was interested in so many things. He stayed so sharp and active, right until the time he passed. It was a real blessing he passed in a peaceful way.”

Born Walter Francis Davis on Jan. 5, 1931, in Beaumont, the man who grew to be 6 feet, 9 inches tall suffered a bout with polio, which temporarily paralyzed both his legs and arms.

“As far as polio is concerned, I was only 8 years old, so I was not aware of what was going on,” Davis told The News in a July 2016 series highlighting Olympians from Port Arthur and Mid-County. “I just knew my mother was upset and I was being treated like a king. The torture part was having to wear those braces on my leg [and] stay in the bed at all times.”

Davis overcame polio by learning to strengthen his legs. At Nederland High School, Davis became a basketball and high jump standout, scoring more than 60 percent of the basketball team’s points and winning district and region championships in the field event. He did not compete in the state track meet and elected instead to play baseball for the Bulldogs.

He accepted a basketball scholarship to Texas A&M, but under NCAA rules at the time had to sit out his freshman year (1948-49). The next three years, Davis made All-Southwest Conference twice, All-District Six twice and selected third-team All-America in 1951 by the Helms Athletic Foundation.

A Texas A&M teammate named Jim Dimmett, Davis said, taught him a form of jumping that Davis later developed into the “Western roll.” The jumper, Davis explained, takes his left foot and puts it under the right hip on takeoff, makes a “semi-dive” over the bar, curls over and rolls over on the hip, then hits the sand in a three-point stance.

He finished as NCAA runner-up in 1951 with a 6-foot, 6½-inch jump, and then won the national championship the next year jumping 6-9. His qualifying jump for the Olympics was 6-10½, higher than his winning attempt in Finland.

Davis said he cleared the 7-foot bar in the 1952 Southwest Conference championships, but added the attempt was lost “on mistake by SMU officials.” His 6-11 5/8 jump in 1953 set the last world record under 7 feet.

“Twice in an exhibition he jumped 7 feet, but they didn’t count it because it wasn’t an official meet,” Shaun Davis said. “He would open up a car dealership, and they would ask him to put on jumping exhibitions. They would fly him out to California and they would set up a high jump deal. He would do those jumps and attract a crowd.”

As an NBA player, Buddy Davis averaged 4.8 points and 4.3 rebounds in five seasons. His celebrity would carry into the 1960s, when he became a national spokesperson for Kent cigarettes, according to his son.

During the NBA offseason, Davis served as a Jefferson County Sheriff’s Deputy. After his career, he had a long career in banking, starting at Groves State Bank, then in Wharton and Texarkana.

Following retirement, Shaun said, Buddy was a civilian employee with the U.S. Coast Guard. He and his wife, the former Margaret Tynan, moved to Puerto Rico, and then came back to Texas as Buddy went to work for the Federal Emergency Management Agency for nearly two decades until he almost turned 80.

Buddy Davis was inducted into the Texas Sports Hall of Fame in 1964. He was honored during the Golden State Warriors’ ring ceremony at the start of the 2015-16 season as a past champion, and in January 2016 went into the Texas Track & Field Hall of Fame along with Carl Lewis, Sanya Richards-Ross and Jeremy Wariner.

Margaret Davis preceded Buddy in death in 2018 after 68 years of marriage. Together they raised nine children and had “dozens” of grandchildren and great-grandchildren, Shaun said.

Arrangements for a graveside service will be made at a later date. No immediate memorial will take place due to COVID-19 restrictions.

**CORRECTED to reflect that Wilt Chamberlain began his NBA career with the Philadelphia Warriors in 1959, three seasons after Davis won a title with the franchise.**