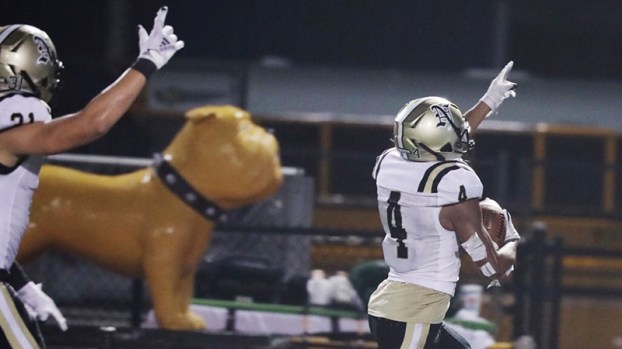 Kerrington Broussard of Nederland returns a fumble for the game-winning touchdown against Barbers Hill in overtime Friday in Mont Belvieu. (Leo Weeks Photographers) 11-20-20

MONT BELVIEU — On the first play in overtime, the Nederland Bulldog defensive line forced a fumbled that was recovered by defensive back Kerrington Broussard and returned for a touchdown to give the Bulldogs a 41-35 win over Barbers Hill in Eagle Stadium Friday.

“I just saw the ball squirt out and the first three people there had white jerseys,” Nederland coach Monte Barrow said. “I’m glad Kerrington picked it up because he can run a little bit. We didn’t do anything stupid behind him.”

The play capped off a series of improbable events that started with Bulldogs (5-2, 4-1 in 12-5A-II) down one point with just over 4:00 left in the game. Nederland quarterback Rene Cunningham threw his third pick of the game. Two plays later, the Eagles (3-4, 3-2) scored to take an eight-point lead with with 3:23 left in the game.

After being sacked for a loss of 12, the Bulldogs offense faced a fourth and 22 from their own 16. With pressure in his face, Cunningham found a streaking Kyndon Fuselier for 84 yards. The Bulldogs completed the two-point conversion to knot the game at 35-35.

“Rene didn’t get a chance to step into it and was still able to hit Kyndon,” Barrow said. “He made some mistakes tonight but he is the reason we are in the position we are in. I think on that play he just knew to throw it up to No. 8 and we like our chances.” 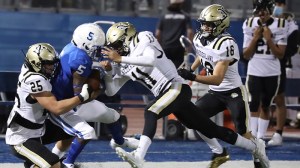 After an exchange of possessions, the Nederland special teams blocked a potential winning 45-yard field goal at the end of regulation.

The Bulldogs offense was stifled early as Cunningham was nearly picked off on the first play of the game after throwing the ball right to a defender who dropped the ill-advised pass. Two plays later, Cunningham was not as lucky as he was intercepted by a Barbers Hill defender who returned the pick to the Nederland 20. Five plays later Eagles quarterback Brent Holdren put the first points on the board with a 5-yard run.

After a three-and-out by the Bulldogs, the Eagles connected on a 61-yard pass to take a two-score lead.

The Nederland offense would not get a first down until its third offensive drive, which was aided by a 49-yard run by Josh Mazyck and followed by a 10-yard TD run by Cunningham.

The Bulldogs defense struggled to get off the field in the first half, forcing the Eagles to punt for the first time with 4:30 left in the second quarter. The defense, which forced numerous third-and-long situations, allowed Holdren to convert third downs with his legs.

Cunningham connected with receiver Broussard on an 8-yard pass for a touchdown with 13 seconds left in the first half to bring the Bulldogs within 21-14 of the Eagles. 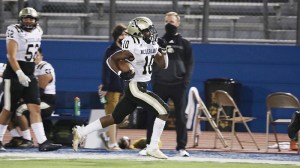 The game changed when …

The Bulldogs surged in the second half outscoring the Eagles 21-14.

The game ball goes to …

The Bulldogs defense, which came to play Friday night. Most of Barbers Hill’s points came after Nederland turnovers, but the defense made huge plays down the stretch to keep the Bulldogs in and win the game.

Said Barrow about chasing down the winning play on the sideline: “I didn’t know I still had that in me. I couldn’t have done an interview right after that, I promise. I was looking for my next breath. I haven’t been involved in one that has ended like that. That was exciting and one for the highlights. I’m glad we were on the right side.”

Mazyck rushed for 136 yards and added 102 receiving and one touchdown.

Nederland’s regular-season home finale against Kingwood Park has been moved up to 2 p.m. Nov. 27. A Nederland win will set up a tilt for the No. 1 seed from 12-5A-II at Crosby on Dec. 4.

BAYTOWN – The Memorial Titans are District 9-5A Division I champions. The Titans claimed outright possession of the title as... read more