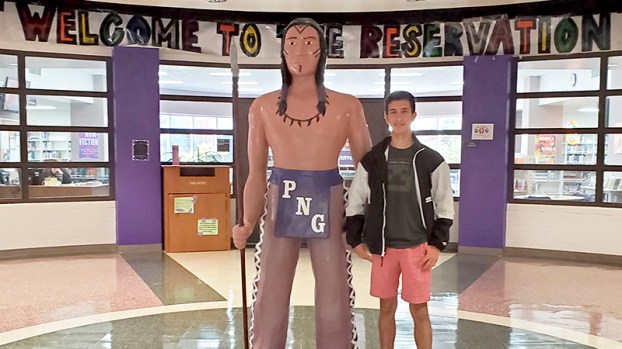 PORT NECHES — High school is not the time to kick back and take it easy — there will be plenty of time for that later in life.

Port Neches-Groves High School senior Keyon Akbari lives this piece of advice as he makes his way through six advanced placement classes that include working toward a certificate as a pharmacology technician as preparation for going into the medical field as a cardiovascular surgeon.

Akbari is undertaking a lot to prepare for his future; he recently spent part of a Saturday at the high school wearing a suit while taking part in University Interscholastic League competition in Congress. He’s also president of Skills USA and Distributive Education Clubs of America.

Oh, and he plays varsity soccer, as well.

Some of his work

During the recent competition in Congress, Akbari was required to speak on eight bills, which ranged from universal healthcare and denuclearizing the United States to an amendment to move to a constitutional monarchy.

While some may shy from the topics and the governmental process, Akbari thrives in them.

“A lot of the time I take topics I wouldn’t personally do. This allows you to do more research and allows you to see the other perspective,” Akbari said. “Even if you don’t particularly agree with it, you can see where they’re coming from and there’s always an argument to be made.”

UIL Congress, he said, allows him to learn what lawmakers go through behind the scenes in regards to funding issues and whether or not a bill would conflict with previous legislation.

“It gives you an appreciation,” he said.

The draw to Congress by a student aiming for the medical field goes hand in hand. These experiences will be helpful on college admissions and prepare him for public speaking in the future, a task he will likely undertake.

Matthew Johnson who teaches AP macroeconomics, AP U.S. government, politics and is the UIL coach, praised Akbari for his hard work and determination.

“Keyon Akbari is a wonderful student and debater who enhances his surroundings with his sharp intellect and keen perception of causality,” Johnson said. “Furthermore, Mr. Akbari enriches classroom dialogue with his unique international perspective.”

Akbari said he comes from a typical immigrant family that fosters a desire to achieve. His family came from Iran and made it through adversity.

“Obviously for me, becoming a doctor, won’t even be half the things they went through,” he said. “Coming and learning a new language, learning a new culture, a whole new set of people. That’s unimaginable. I can imagine being a doctor is easy compared to that.”

The high school senior lists his late uncle, Ike Akbari, as his role model. Ike Akbari was founder and CEO of ITEX Group. He died in 2015 after a battle with brain cancer.

Ike Akbari came to the U.S. and worked hard to become a successful businessman.

“He worked so hard to be here without any other outside help,” he said. “When he came here there was no one to help. He had to find connections, find a way to succeed.”

Akbari has been playing soccer since he was 6, saying “basically it’s part of my identity. I can’t go without soccer.”

He continued playing through the years and moved up to one of the soccer clubs, then along came six AP classes. He plays on the high school varsity team as a left defender and is hoping there will be a season this year.

As much as he loves the sport, he won’t continue it on the college level, saying it will take a lot to pursue his medical career, though he can still play with family and friends.

In addition, he also plays the piano and has been doing so for 13 years. He was in one of the top bands at school, but band conflicted with soccer so he chose the sport.

Akbari was asked if he had any advice for success for younger students.

“I would probably say, it’s such a little amount of time so do your best in the four years to eight years in college then you will have a lifetime of enjoyment,” he said. “You just have to put some effort into it. If you finish these couple of years good, you don’t have to suffer.”

Keyon Akbari is the son of Nouri Akbar, an environmental chemist, and Giti Akbari, who works at ITEX.

Neighbor: You must go inside at dark. PA killing & arrest punctuates violence; 3 deaths in 24 hours

The day-to-day life at a set of Port Arthur apartments seemed routine less than a day after 28-year-old Emon Jacorey... read more