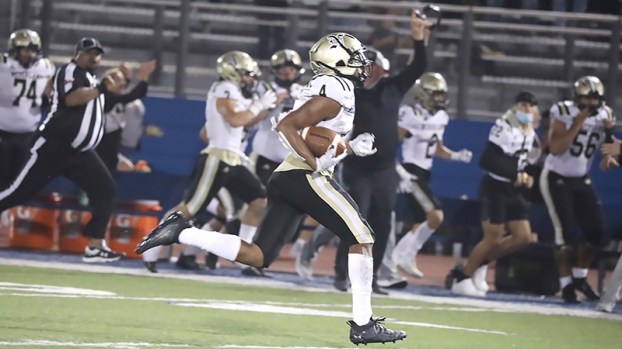 Kerrington Broussard of Nederland returned a Barbers Hill fumble for a touchdown on the first play of overtime to win the Nov. 24 game, 41-35. (Leo Weeks Photographers)

On the last play of Nederland’s 41-35 overtime win over the Eagles, Broussard returned a fumble 73 yards for a walk-off touchdown.

“I already knew what the play was going to be,” he said. “They had scored on us with that play earlier in the game. I got outside the box and (the quarterback) ran and I saw all of my teammates hit him. I saw the ball come out and I just picked it up and ran.”

When Broussard picked up the ball and saw no Eagles in front of him, he said there was a zero percent chance anyone was going to catch him.

“I knew I was going to score,” he said. “I had too much adrenalin.”

Head coach Monte Barrow said Broussard ran like a bear was chasing him.

“I think he could’ve turned around and ran it again if he needed to,” Barrow said laughing. “I think the whole team could’ve with all of the adrenalin. I could too, but I felt it the next day.”

Barrow spoke highly of Broussard’s conditioning. The senior also starts at wide receiver for the Bulldogs, which is a responsibility he earned this season.

“He has really surprised us with his ability to go both ways,” Barrow said. “The shape he is in is a pleasant surprise and he has helped us on both sides of the ball.

In Friday’s win, the Bulldogs found success blitzing Broussard at a quarterback known to make plays with his legs.

“He is athletic and one of our stronger kids,” Barrow said of Broussard. “He can take on blocks from offensive lineman and use his hands and at the same time be quick and agile enough to get around them when he needs to. He is a hybrid player that can play inside, and we can line him up at safety. Not many can play linebacker and then line up at receiver.”

Broussard enjoys playing defense more than offense because of his knack for seeking contact.

“I like hitting people,” he said with a smile. “I like making tackles and being in the mix.”

Barrow said the work the linebacker put into the offseason paid off.

“He’s been doing a lot of 7-on-7 in the summer and has been able to travel and that has helped him,” Barrow said. “Any time you have guys that are talented like that and can play different positions, it gives you a level of comfort. You don’t have as many backups because you know he can play multiple spots.”

Broussard has been a key factor in a defense that has come up with some big plays this season.

“I feel like we are the best defense in the district,” he said. “We fly around and are jelling together really good right now.”