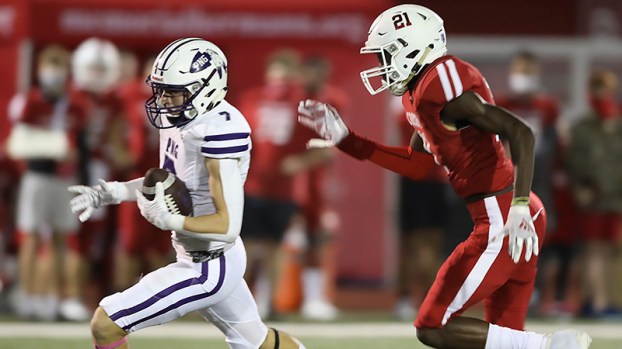 Brady Nail of PNG tries to gain runs after the catch during the Oct. 20 loss at Crosby. (Leo Weeks Photographers)

PORT NECHES — Coming off a gut-wrenching loss to the district-leading Crosby Cougars, the Port Neches-Groves Indians will look to get back on track and solidify their playoff spot against Texas City this Friday.

The Indians (4-4, 3-2 in 12-5A-II) take on Texas City at 2 p.m. Friday at Stingaree Stadium. The game time was moved up due to the potential for inclement weather in the evening.

Both teams have plenty to play for as PNG is coming off a 54-16 loss to Crosby and the Stings are coming off a 65-13 win over Dayton. Texas City is on the outside looking in for a playoff spot, but a win against PNG would greatly improve its chances.

Dropping a game to the Stings would put PNG’s playoff chances in peril.

“The good thing is (the Crosby game) wasn’t our last game of the season,” PNG head coach Brandon Faircloth said. “We get to go play another game. We have had a great week of practices. I’m really proud of the way our kids have responded. They played extremely hard the other night against a really good team.”

Texas City enters the game with the most unbalanced offense in the district. The Stings feature the leading rusher in senior running back Semaj McCall, who has 935 yards rushing on 132 carries and 12 touchdowns.

The running back brings a combination of size and speed, often breaking arm tackles and requiring multiple defenders to bring him down.

McCall will be matched up against the district’s third-worst run defense in PNG, which has allowed 2,113 yards on the ground this year.

While the Texas City running attack is stout, it is not complimented by a district-low passing game that only has 397 yards on the season, compared to PNG’s passing game that leads the district with 1,916 yards. The Stings do not have a single passing touchdown on the year.

Senior quarterback Blake Bost leads the PNG offense with a district-leading 34 total touchdowns (19 passing and 15 rushing). He leads the district in total yards from scrimmage with 2,452 (1,856 passing and 596 rushing).

He will be matched up against the league’s top defense in Texas City.

The Stings defense has held opponents to an average of 291 yards of offense per game.

“They are physical,” Faircloth said. “They stop the run and do a good job of taking away some of your passes that you like to throw. They are a tough matchup on everybody.”