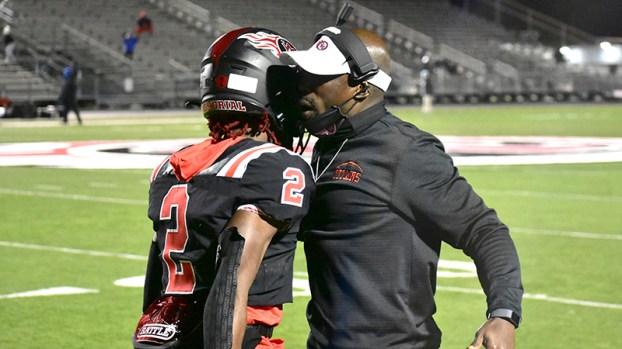 Family members of Memorial Titans offensive coordinator Rashard Colquitt were surprised to receive invitations to his 2018 graduation for his master’s degree.

Not because they didn’t believe Colquitt was capable, but simply because he had not told a soul he was studying for it.

“I showed them the invitation to graduation,” he said. “It was in an envelope and they were confused. I told them to open it and they were like ‘Master’s degree?’ and I told them I went and got my master’s. I showed it to my mom, my grandma, my uncle and my girlfriend. It was big deal. My girlfriend didn’t even know.”

Colquitt said he would find time to work on online courses from Concordia University.

“I would grind it out,” he said. “I would just go to the fieldhouse doing it. It was a big deal. I wanted to surprise them with that. My family is real big about education, so I wanted to do that for them.”

Colquitt earned his master’s in sports administration in hopes of one day becoming a head coach and athletic director.

For now, he is studying opposing defenses the Memorial offense has graduated to face in the playoffs, where the Titans will play Fort Bend Hightower at Memorial Stadium in the 5A Division I bi-district round at 7 tonight.

Memorial closed the regular season with the first undefeated record in school history and District 9-5A Division I’s leading offense. The Titans led the district in rushing yards with 2,142. Second was Baytown Lee with 1,711.

Memorial has a number of weapons at Colquitt’s disposal. Quarterback Jah’mar Sanders led the district with 34 total touchdowns and was responsible for 210 points. Sanders was second in the district in passing yards and rushing yards and led all with 18 rushing touchdowns.

Running back Adrian Hayward led the district in receptions with 42 and wide receiver Tyrence Augusta led all rushers with 13 yards per carry, albeit on 21 rushes.

“It is fun to have these players and draw up plays for them,” Colquitt said. “It is a great problem to have to find ways to get guys touches. When the ball is in their hands, they can do something special. We have this friendly contest where we put down our top plays and see who had the most yards and touchdowns. We have fun with it.”

Colquitt said the players make the offense run because they are unselfish.

They want to play for the guy next to them.

Memorial head coach Brian Morgan said the unselfishness starts with Colquitt, who he describes as an “unbelievably hard worker.”

“He communicates with kids well,” Morgan said. “He is willing to do any job. He doesn’t care what it is. If you told him to sweep the floor, he will do it, do a great job and take pride in it. When you try to hire guys, you get a young guy that wants to continue to move up and that doesn’t ever think something is below him. That is a great trait to have in a coach.”

Colquitt was raised to do things the right way and his love for the city drives him to want to do better.

“Port Arthur is my second home,” he said. “I’m from Corrigan, Texas. I love these kids. This is my fifth year here and I am invested in this program. Anything Coach Morgan needs me to do, whether it is sweeping the floor or whatever, I am going to do it to the best of my abilities. My mom and grandma raised me that way. Any job or task you have, you give it 100 percent. I am all in with this program. I want these kids and this program to be successful.”