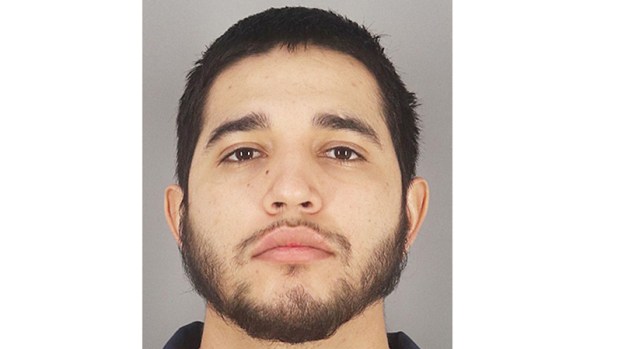 GROVES — A local man is facing a felony arson charge after authorities say he set a car on fire that belonged to the boyfriend of his ex-girlfriend.

Roberto Valencia Jr. of Groves was indicted this week by a Jefferson County grand jury.

Authorities launched a fire origin investigation a little after 3 a.m. March 22 at 3820 Lay Avenue in Groves following a vehicle fire in the cargo bed of a truck.

No accidental cause could be determined and no natural source of ignition could be found.

A few hours before the fire occurred, Groves Police Department officers responded to a fight between the 23-year-old truck owner and Valencia, 23.

A probable cause affidavit stated that Valencia “was the baby daddy” of the truck owner’s now girlfriend.

Investigators determined Valencia was driving a maroon Toyota Camry with black rims at the time of the fight.

Security footage from a nearby doorbell camera showed a sudden light of what appears to be flames and then a maroon 4-door car with no lights on with a spoiler on the back driving away towards 39th Street.

Distinctive discoloration on the hood of the vehicle was also noted in the video.

Shortly after the fire, police took the victim to Figueroa’s Wrecker, where the victim identified the vehicle the suspect had been driving earlier in the night.

A Groves police officer touched the vehicle hood and said it was hot, indicating it had been recently driven.

The wrecker’s owner confirmed to police the suspect lived on the property and worked for him but did not give consent for police to enter the property.

Authorities said during a later interview, the suspect admitted to driving the Camry and fighting with the victim but denied going back to the property and starting the fire.

The suspect also told police no one else had access to the vehicle.

To Dr. Anthony Pinn, the idea of hip-hop music as a religion makes perfect sense. “It started for me when... read more