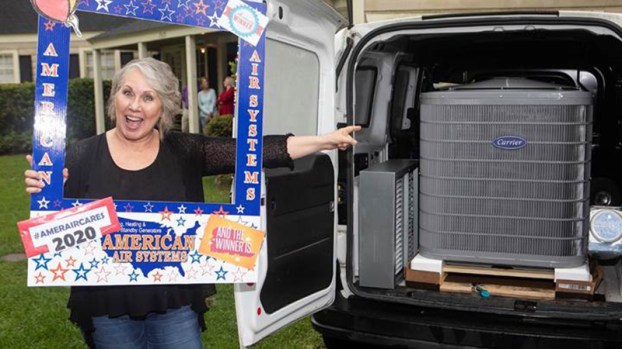 Carina Kirk reacts as the winner of the 2020 AmerAirCares free HVAC recipient.

Know a family in need of an AC unit? American Air Systems has giveaway set.

For the third consecutive year, American Air Systems is giving away a full air-conditioning unit to someone in need.

The company’s president Lee Potter said the event is a way to give back to the community.

“We have been very blessed with our business here and how people have taken care of us,” he said. “We decided we needed to figure out a way we can give back. We thought that if we were going to do this, let’s just do it right.”

Potter said they came to the conclusion that giving away a full system would be a cool idea, pun intended.

“The first year, we had around 27 nominations,” Potter said. “Last year, we had 90. We are growing it and growing it. We got together with a few people to work things out to make sure everything is on the up-and-up. Any nomination that comes into the company goes to the ladies up front. We have a master copy that goes into a folder. They go in and redact names and anything that could identify who that person is.”

The company recruits leaders in Southeast Texas to be part of a committee.

“We have 18 people on the committee from all different walks of life and come from all over the place,” Potter said. “They do not work for me. We may feed them dinner a little bit, but they come in one night in April and sit down and read the reviews.”

From there, the list is narrowed to a top five before listing them in order of whom each would like to win.

“That allows us to reach out to the people that made the nominations,” Potter said. “If we need to, we go out and look at the house and make sure it can be done. Once we do that, we are going to reach back with the person that nominated them and tell them that we want to do a, for lack of a better term, ‘Publishers Clearing House Giveaway.’”

Potter said they meet the winners and present them with a thermostat, aka the “key to their new system.”

“We want to award it in late April or early May and get it installed right before summer,” he said.

Potter said the giveaway brings him a great feeling of joy.

“It is awesome,” he said. “We get way more than what we give. It is emotional and exciting. All of those feelings that you get all jump out and come into you. If you can’t take care of those who take care of you, you are kind of in the wrong spot. We love it. We try to do as much as we can.”

Potter said his favorite part of the giveaway is that it inspires other contractors around the country to do the same thing.

“Two of the mix group guys have picked up the mantle of our giveaway and you now have three or four more people in this country that have brand new systems because of something that we started,” he said.

Those wishing to nominate someone for the air conditioning system can do so by calling 409-842-2402 or going online at amerair.com/ameraircares and following the instructions.

“We continually hone our craft, because air conditioning is becoming more expensive and more required,” Potter said. “There is a lot of ‘good enough’ out there, and we’re more than ‘good enough.’ We think we are one of the best residential HVAC companies in this area.”

The Nederland Bulldogs clinched a playoff berth with a 56-50 win over Memorial Tuesday night. The loss for the Titans... read more