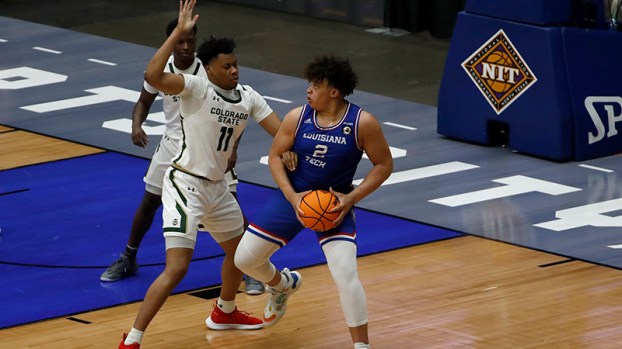 Lofton posts up a defender during the NIT basketball tournament March 28, 2021. (Roger Steinman)

The third time is the charm, as they say.

With less than 10 seconds remaining and the score knotted at 74-74 in the Bulldogs’ final game of the season, La. Tech head coach Eric Konkol drew up a play for the youngest player in his starting lineup.

With about four seconds left in the game, the ball was given to Lofton at the left elbow, where he used his strength to muscle past a defender before using his finesse to finish at the rim with a left-handed layup between two opposing players.

“We all grew overall as a team,” Lofton said to Port Arthur Newsmedia. “We put our trust in a lot of people. I was going good that game. Coach decided to give me the last shot or run it through me. I scored the bucket on the last play…It felt great.”

The shot in the consolation game of the NIT Tournament capped off a run where Lofton averaged 17.5 points, 7.8 rebounds.

Over the last two games, Lofton played 30 and 34 minutes, respectively.

During his first game of the season, Lofton played 12 minutes.

“I will never forget the first game of the year,” Konkol said. “He came out after a three-minute stretch and said ‘Wow, that was fast. I’m tired.’”

As the season went on, Lofton became more comfortable with the flow of the game, becoming one of the most awarded freshmen in the conference’s history.

Lofton was named to the All-Tournament Team, 2020-21 Conference USA Freshman of the Year and was named C-USA Freshman of the Week nine times (out of 14), which tied for the third most in league history.  He capped off the regular season being selected six consecutive times, tying a league record.

He was also named to the All-Conference second team.

“Junior came in like most freshmen,” Konkol said. “He was just trying to learn the college game. It is different from high school. There is a shot clock and the three-point line is further out. It is a longer floor. As he got his feet on the ground and got in better shape and started to learn… We knew when we recruited him, that he was a talented player that could score and rebound, but he just found his way though some ups and downs… He got more and more consistent and was on a great roll in late March.”

Konkol said watching Lofton grow as a player was one of the most rewarding feelings a coach has.

“One of the most satisfying and gratifying things as a coach is watching guys improve,” Konkol said. “The amount of improvement that our entire team made, from the first time we got together in the summer and into the fall and non-conference play and conference play and even through the postseason, was great.”

The freshman benefited from having teammates who were ready to take them under their wings.

“It has been a big part of our success,” Konkol said. “The way we have been isolated from everyone else, you have to be a close-knit group. If you are not, this year would have been really challenging. We have really great players, who come from really good families. In Junior’s case, nobody cares if you are a freshman, sophomore, junior or senior on this team. It is about whether you can contribute. Guys are committed to winning. He went out and handled business and competed early and won the respect of his teammates. He respects them and it has been a great relationship.”

As far as what Lofton will do after college ball, the freshman said he is only looking forward to the immediate future, which is still includes playing for the Bulldogs.

“I just worry about the next day,” Lofton said. “You can look on what the future holds. As of right now, I will be back next year playing and working on getting better here with my teammates and getting stronger and building a relationship with the incoming freshmen.”

Lofton said he is ready to help be the mentor for incoming freshman like the upperclassmen were to him this past season.

“I’ll take them in and teach them everything they need to know,” he said. “I’ll let them know what its about. Work hard every day, weight room, class.”

Konkol said he sees Lofton’s potential to develop into an NBA-caliber player.

“During the recruiting process, we talked about Zach Randolph, who played in the NBA a really long time,” Konkol said. “He is a lefty, who had some size and a really good knack and feel, but there is only going to be one Junior Lofton and we want him to be the best version of him…I think he has a chance to be one of the great players at Louisiana Tech in a storied history of a lot of good frontcourt players.”

The Port Neches-Groves girls soccer team fought until the bitter end, but was unable to take down Friendswood in the... read more