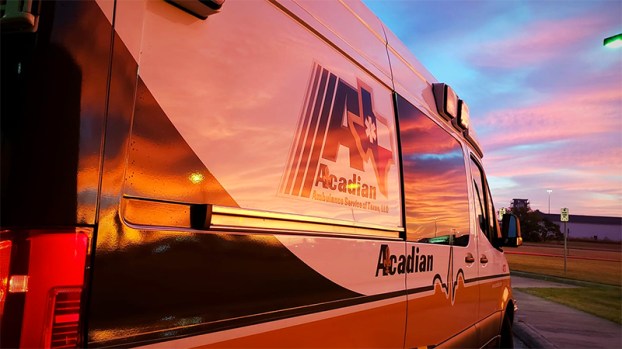 The Medical Center of Southeast Texas is hosting Acadian Ambulance Services today (April 7) to bestow “Distinguished Service” awards to paramedic Heather Waites and EMT Ryan Wilkenfeld for their heroic measures during the Polar Vortex in February.

It has been 14 years since Acadian Ambulance Service has bestowed this honor.

While taking a medical patient to the hospital during the winter storm, a vehicle passed the unit on an icy highway and lost control.

The vehicle spun and crashed, overturned and landed on its roof in a median filled with ice and freezing water.

The crash occurred on U.S. 69 northbound near the cross street of 61st.

The crew, which includes Waites and Wilkenfeld, stopped and rendered aid as the crash occurred directly in front of them.

Five patients were trapped in the vehicle, and the crew had to break windows to extricate them. After four of the patients were extricated, one of them asked “where’s the infant?”

The crew re-entered the vehicle and found an infant in the water, unresponsive, not breathing and without a pulse.

The crew successfully resuscitated the infant in a short time. Due to their close proximity to the nearest hospital, along with knowing the delays there would be for additional help to arrive due to the ice storm, the crew loaded the five additional patients into their unit with the original patient they were transporting and proceeded urgently to the hospital.

The victim family was from Beaumont, and the infant was treated at The Medical Center of Southeast Texas and then transferred to Texas Children’s Hospital in Houston.

Within a few days the infant was feeding again and behaving as any infant would and is expected to make a full recovery.

A ceremony honoring Waites and Wilkenfeld is planned at 2 p.m. today at The Medical Center of Southeast Texas.

Read more here about the ceremony honoring the hero EMTs.