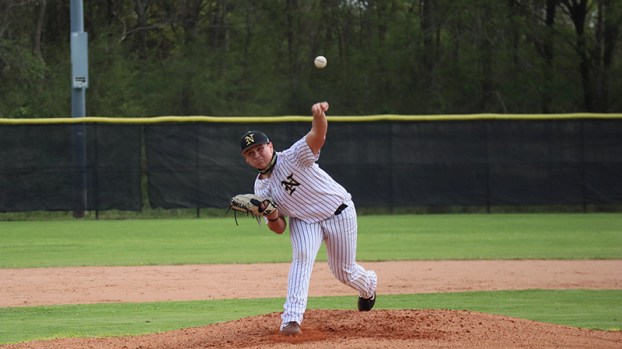 Nederland freshman Brady Corcoran has been steady for the Bulldogs all season. (Chris Moore/The News)

NEDERLAND — Many coaches don’t go into a high school baseball season with a plan to lean on a freshman pitcher, but Nederland’s Brady Corcoran has shown he belongs on the mound.

“As the season went on, when he got opportunities, he proved to our team that the moment wasn’t too big for him,” Bulldogs coach Bryan Spell said. “He is a good kid and has a great grasp of the game. You can see as the year went on that he had the ability to compete at a high level. You never really know until you get into the ball games. I think from the first time he has touched rubber, he has been good for us.”

Corcoran has been playing baseball since he could walk.

His uncle took him out in the back yard and threw wiffle balls to him and he has been in love with the game ever since, Corcoran said.

The freshman lefty said the first ball he learned to throw was a fastball, followed by a change up.

“A good fastball with a good changeup is a good combo,” he said.

Now, the pitcher has a fastball, changeup, curve ball and a cutter. The fastball can reach 82 mph, but he said he consistently throws it at 80 mph.

Spell said Corcoran threw a no-hitter in the Bridge City tournament at the beginning of the season. Both Corcoran and his coach thought his best game came against rival PNG.

“We were coming off a loss, and another loss would have really put us in a hole,” Spell said. “He had a no-hitter for five innings. When you get on that stage, with that much on the line, that kind of sealed the deal. We knew he was for real.”

While he is one of the younger players on the team, Corcoran is a role model to his younger brother.

“He is 8 years old,” he said. “He is just starting coach-pitch. He definitely wants to be a pitcher. He is my little shadow and mimics everything I do.”

Freshman Ryan Bell, who has played with Corcoran since little league, is not surprised that his friend has been successful.

“He has always been a hard worker and has always given it everything he has got,” Bell said. “He is a great teammate for everybody.”

He said Corcoran’s ability to stay calm is one of the reasons the pitcher has thrived at the high school level.

“For him, being calm is really important,” Bell said. “The pitcher is in control of everything. They are in control of the speed of the game. If you get too emotional, you can screw things up. You are going up against 18 year olds and it is hard to keep that level of confidence the whole game.”

The Bulldogs will finish their regular season Friday with a game against Barbers Hill.

BEAUMONT — At 10:45 a.m. Thursday, Beaumont Police responded to the 2500 block of McFaddin in reference to a disturbance.... read more