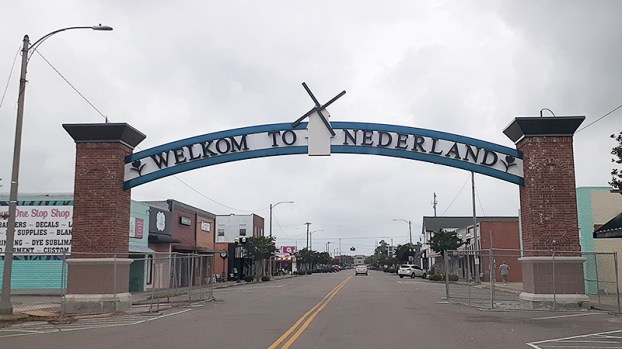 NEDERLAND — The Gateway Arch to Nederland over Boston Avenue is being constructed, in part, as a talking point, providing locals and visitors a focal attraction in the Mid County city.

Judging by the last week, local leaders are already receiving their money’s worth. Community conversation and social media commentary took off this weekend when eagle-eyed passersby noticed an “N” was inappropriately affixed to the sign’s eastern facing sign.

The sign is a Nederland Economic Development Corporation project, and local officials said the city was never in danger of accepting the project with incorrect lettering. 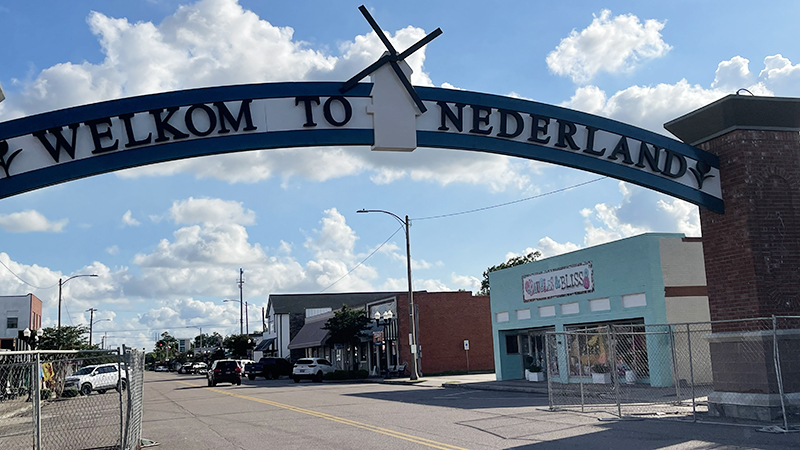 The “N,” posted second from the far right, has been corrected after it was temporarily (pictured this weekend) installed incorrectly. The project is expected to wrap up this month.

“There is a lot of intricate detail to the sign,” EDC Executive Director Kay DeCuir said. “I’m sure that last N got stuck up there by mistake. I was on it this weekend, actually late Friday. We just told the contractor that it needs to get fixed ASAP, but we’re not paying overtime. So, Monday, soon enough, they took care of it first thing in the morning.”

Nederland City Council members approved construction of the $179,200 archway late in 2020. The archway started taking shape in April, and EDC officials expect completion by the end of this month, weather permitting.

A distinctive “Welkom To Nederland” spelling honoring the city’s Dutch heritage wraps across each side of the arch.

The former police chief noted Boston Avenue was active with businesses when he came to leadership in 1960, then slowly dried up like a lot of towns.

He said activity is picking back up with new and expanding businesses wanting to move to Boston Avenue. The sign project is something he favors.

“It’s going good, and I think it is going to be great for the city, for people coming, visitors and people on Boston Avenue,” Neal said Monday. “I think all the merchants on Boston Avenue are real happy about it. I think it is something great that the EDC board has done. It really is pretty.”

Future work includes adding words to the west-facing side. LED lighting will be added to both sides so the letters appear bright at night.

Lights on the top and coach lamps on the front facing Twin City Highway are also scheduled for installation.

“At the very bottom on the actual ground itself, they are going to do brick pavers like you see on our sidewalks,” DeCuir said. “That will be inset. It’s like the arch sits on top of this massive brick paver.”

DeCuir said one parking space that was removed to accommodate the archway sign will be returned near its original location following restriping.

The archway is being constructed just west of Cropo’s Barber Shop and crosses the street to between Lee Michael Hair Parlor and Cuttin Corners Vinyl. The height at the center of the arch is 17 feet, 2 inches.

On Saturday at 6:59 p.m., Beaumont Police responded to the Lindbergh overpass in reference to a welfare concern. Patrol officers... read more