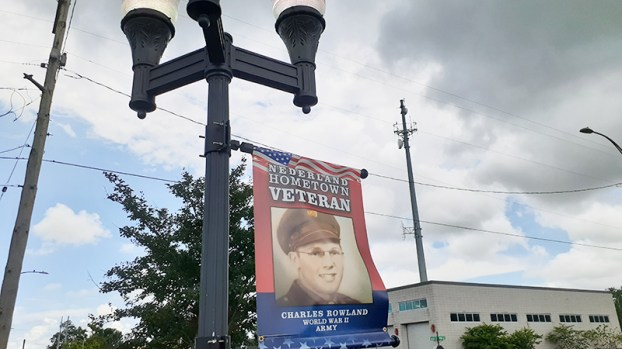 Charlene Hecht lives in the home her father built decades ago on South 27th Street in Nederland. It’s on the same property where she was born.

The 76-year-old stays true to tradition and patriotism, traits she picked up in a military family.

Charlene was born in February of 1945, two months after her brother was killed while serving in World War II.

Charlene’s brother — Charles Rowland — was 19 when he was killed. She never met him, but she is named after him. Her middle name is a tribute to Charles’ then fiancée.

Recently, Charlene and I spoke about her brother, who is one of the Veterans from Nederland pictured on a banner lining Boston Avenue.

Charles is buried in St. Arnaud in France. His family has a footstone in his memory at Greenlawn Memorial Park in Groves.

Charlene says Charles has always been present in her life.

“I knew it crushed mom and dad to lose him,” she told me. “Also, I was spoiled rotten because of it. There were eight of us. The older kids always said, ‘mamma and daddy never gave spankings to me or Joe,’ who was my brother two years older than I, after Charles died. They would never whip again because daddy felt bad about giving (Charles) whippings when he died so young.”

Charlene and Charles’ father, Clyde, also served in France, working as a medic with the U.S. Army during World War I.

Many people in their family served, including Charlene’s brother, Donald, who served in the Air Force. Two of her brothers-in-law also served.

Memorial Day celebrations mean a lot in their family.

“If everyone was here, we would gather, cook and eat, but we always went to the cemetery,” Charlene said.

According to Charlene, the connection to her brother presented itself in the most surprising way when she was a junior in high school.

She went with friends to Port Neches to pick up another friend named Jimmy. After arriving, they all sat and talked with Jimmy. Charlene noted Jimmy’s mother was there and was very pretty.

“She told me what her name had been, and my mouth fell open. I thought that was so awesome. I came home and told mom about it and she said, I haven’t seen her in years,” Charlene said.

Jimmy’s mother was none other than Charles Rowland’s former fiancée and it was their first time seeing each other.

Charlene recently went through some of Charles’ belongings that were sent home to the family after his passing.

Charles kept writing material on his body while in service and there was a notation written in pencil. The expert marksman was known for his ability to shoot on target at more than 500 yards. He wrote machine guns “600 yards away on Hill 619, dug in … will continue on my mission.”

“There is no date, but I am thinking it (was written) in the week he was killed,” Charlene said. “I had just found that in the past year going through things.”

Ultimately, Charlene is happy her brother’s image is shared with other family members and fellow Veterans and active duty service members along Boston Avenue in Nederland.

There are so many people in our community, past and present, who have given much for others. We honor them by sharing their stories.