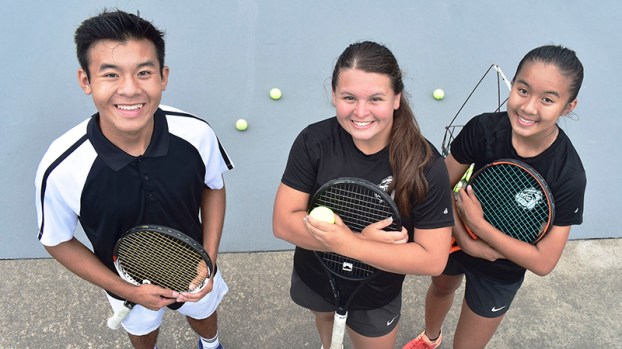 Brandon Do, left, won the state 5A singles championship for Nederland in 2019. Jayci Wong, center, and Megan Do teamed up to reach the 5A doubles semifinals. (I.C. Murrell/The News)

Middle school students in the Nederland Independent School District will have more opportunities to play sports this upcoming semester.

The district announced that the middle schools will offer tennis and soccer for students, allowing more options and the ability to start high school with a better foundation should students choose to keep playing.

“This past school year, our middle schools — us and Port Neches — got into a district with Beaumont and Port Arthur. We had lost Vidor and Lumberton. They had soccer and tennis in that district. We took last year to evaluate and start this year. It is, maybe, four weeks or something but it gives the middle school kids a taste.”

Barrow said the addition should also give students a head start on learning fundamentals and allow coaches more evaluation at an earlier age.

“It always good, these days, for kids to have something to do,” he said. “A lot of them that play those two sports, or one of them, might not play volleyball or football or track. There are definitely more options for those kids.”

Lopez said the district offered tennis at the middle schools in the early 90s and the program reaped the benefits.

“In those years, we went to state in team tennis, which is hard to do,” he said. “From that foundation of kids, we had a kid go to state twice and had a doubles team go. We were very successful and it was because of seventh and eighth grade tennis. The kids had a much better foundation.”

For many students in the area, the lack of tennis leagues means the only chance to play competitively is through the school district.

“There are going to be some kids that get involved that might not have ever played otherwise and might end up being really good,” Lopez said. “I think NISD is doing a great job because it is giving the kids a chance to play something else that they may have wanted to.

“I have had so many kids that come to me as juniors and say that they want to play tennis, but by then, it is too late, because they never picked up a racket. These were volleyball and soccer kids. They might have tried both when they were in junior high.”

PORT NECHES — The Port Neches-Groves 7-on-7 team qualified for the state tournament. The team will compete at College Station... read more