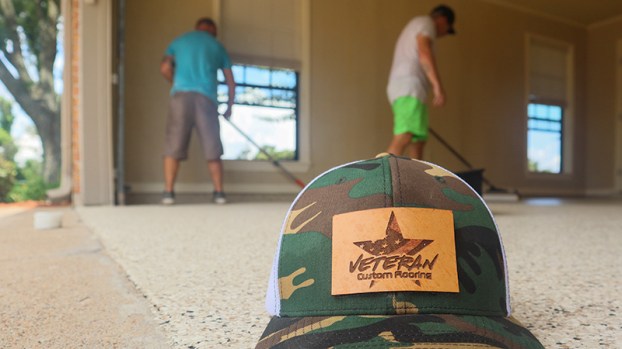 After 15 years in the military — 10 years in the active-duty Marine Corps and five in the Air Force reserves — David Smith worked as a federal employee.

“We moved around,” Smith said. “It was tough on the family not having my wife’s family around. We moved back to Beaumont, where we already had a home with no mortgage. There are not a lot of government jobs out here, not for what I do, so I told my wife I would figure it out.”

“He is a tile guy and has been doing it for 20-plus years,” Smith said. “He still does it. That was how I got into it. I helped him with a few jobs and then started doing it on my own. It was a job and it became a thing.”

“I guess it was by faith, really,” Smith said. “There was job around Texas I could get but we wanted to be around the family. It just fell in my lap and I ended up learning it.”

Smith started out doing indoor flooring, but has sense moved to work primarily on outdoor projects.

“We call it concrete beautification, but it is concrete coatings,” Smith said.

He said his time in the military prepared him for the next phase of his life.

“I joined the Marine Corps right out of high school and it helped get me out of a small hometown in South Carolina that most people get stuck in,” Smith said. “I try to only hire veterans. My right-hand man (Andy Warden) is a Purple Heart recipient. It is a different mindset and work ethic. We are on time and punctual. We build great relationships with the customers. They trust us because they get to meet us.”

While he and Warden make up the team right now, Smith has not ruled out expanding in the near future.

“It is a double-edged sword,” he said. “We had some extra guys early on, but since COVID, we have just had two guys. I would like to grow. The problem is that if we are busy, it is hard for me to get out and do bids and get more jobs. We have been picking and choosing what we do so I can be here and get to the jobs I want to do. If we do grow, I would probably have to step back into a managerial role and site jobs.”

Smith and Warden work approximately three projects a week, with the majority of them taking two days to finish.

“I have started reaching out to some marketing firms,” he said. “We just finished doing the concrete outside of Walk-Ons and then we went and did Cowboys in Lake Charles. That has helped me grow by meeting the right people and getting the word out.”

Word of mouth has been the business’ best advertising thus far.

On Thursday, Smith was working a job in Bridge City after a former customer referenced him to a family member. He recently did work for Port Neches Police Chief Paul Lemoine, who recommended Veteran Custom Flooring in a social media post. Smith said he received several inquiries shortly after.

“Word of mouth is huge,” he said. “We are growing organically without doing too much work on it.”

A link and bake sale is set for this weekend to help a father of four as he battles cancer.... read more